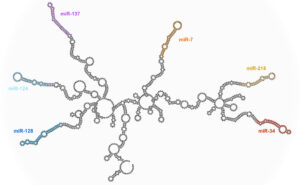 What is the role of microRNAs in glioblastoma (GBM)? How do they control the epigenetic landscape of the tumor and its microenvironment? Questions like these are at the heart of the research of Pier Paolo Peruzzi, MD, PhD, a neurosurgeon and researcher at the Department of Neurosurgery at Brigham and Women’s Hospital.

In October, Dr. Peruzzi received a prestigious Distinguished Scientist Award from the Sontag Foundation. The four-year, $600,000 grant supports his work aimed at expanding the role of microRNAs in GBM biology and its treatment. It is the latest in a string of honors that has also included regular National Institutes of Health (NIH) funding since he joined the Brigham in 2015.

“Our goal is not only to figure out a practical use for these microRNAs, something that my NIH grants have helped with, but also to find a more mechanistic description of how the microRNAs work,” Dr. Peruzzi said. “This is something that the Sontag grant will help me with. It’s allowing me to look at different perspectives and widen my research focus.”

Due to its location in the brain, GBM is inherently difficult to treat. But it is also notoriously adept at evading treatment.

“Through mutations or rearranging their genome expression, GBM tumors can figure out ways to overcome toxicity from other sources, like chemotherapy, radiation and immunotherapy,” Dr. Peruzzi said. “These tumor cells are constantly changing, so we need to find a way to prevent their adaptability.”

A potential solution lies with microRNAs, short, non-coding genes that regulate protein expression. Dr. Peruzzi’s interest in microRNAs, which are important in regulating molecular biologic processes in cancer cells, dates back to about 2010. “I was looking for something for GBM that was versatile and reasonably easy to work with from a genetic engineering perspective,” he said. “MicroRNAs just fit the specific need I had.”

In late 2019, a Dr. Peruzzi-led research team from the Department of Neurosurgery released a step-by-step “recipe” for combining microRNAs into genetic therapies. The article, published in Nature Protocols, presented a simple process for creating artificial microRNA clusters. According to Dr. Peruzzi and his colleagues, a graduate student or technician with basic knowledge of molecular biology could use routine laboratory equipment or techniques to complete the process in less than 12 hours.

Ten months earlier, Dr. Peruzzi’s research team reported in Nature Communications success in using this novel method to co-opt the molecular machinery of GBM cells in a way that made them more vulnerable to treatment. Mice with GBM receiving the treatment showed a five-fold increase in their response to chemotherapy.

Earlier this year, Dr. Peruzzi began collaborating with Noriyuki Kasahara, MD, PhD, at the University of California San Francisco to start building up a pipeline to clinical use in patients. Dr. Kasahara’s team will provide a delivery vector (a special virus that has been used in prior clinical trials for GBM), while Dr. Peruzzi will fit the virus with his novel microRNA “brain.” Since the virus has already been approved in humans, the teams expect a fast-track application to new clinical trials.

“We expect that this virus, which can replicate inside the GBM tumor, will be able to deliver the multiple-microRNA payload to the tumor. Then, we can actually treat the tumor with radiation, chemotherapy or immunotherapy and, hopefully, get good results in terms of survival,” Dr. Peruzzi said.

What the Sontag Grant Will Make Possible

Dr. Peruzzi called the honor the “holy grail” for researchers in his field because of the foundation’s highly selective process and nearly 20-year history of funding transformative work. He added that the grant will have a dramatic impact on the research that he is able to pursue over the next four years.

“One of our goals is to find the best microRNA and/or non-coding RNA combination to treat glioblastomas,” he said. “But there is also a more academic quest, which is trying to understand how microRNA genes really work. What we know about microRNAs and how they function is probably only part of a bigger picture. We also need to study and investigate the processing of the microRNA genes and how this is important for the formation of GBM tumors.”

While Dr. Peruzzi laments the long-time stagnancy in the prognosis of GBM, he is optimistic that change is coming. He hopes to help lead the way. “I’m trying to be a new voice and to create new strategies and tools that will work along with existing therapies to give us more practical solutions for treating these tumors,” he said.

“None of this would have been possible without the unwavering support of my chair, E. Antonio Chiocca, MD, PhD,  and the Brigham and Women’s Hospital leadership,” Dr. Peruzzi concluded. “The Brigham has a known vocation to tackle challenging health issues by empowering researchers to perform high-risk/high-reward investigations and nurturing them with an amazing network of incredibly smart and dedicated people.”