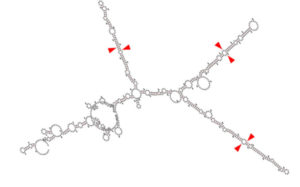 A research team from the Department of Neurosurgery at Brigham and Women’s Hospital has published its step-by-step “recipe” for combining microRNAs into genetic therapies. The new publication comes on the heels of earlier work that shows promise for a potential glioblastoma (GBM) gene therapy. In sharing their technique, the researchers hope to help others create transgenes that could target virtually any complex molecular pathway in a broad range of tumors and other disorders.

“This is a tool that the research community can use to investigate the role of microRNAs and potentially envision their use in gene therapy,” said Brigham neurosurgeon and researcher Pierpaolo Peruzzi, MD, PhD, lead author of “Engineering, delivery, and biological validation of artificial microRNA clusters for gene therapy applications,” published in Nature Protocols in late 2019.

In the article, Peruzzi and colleagues describe a process for creating artificial microRNA clusters that can be achieved in less than 12 hours by a graduate student or technician with basic knowledge of molecular biology and routine laboratory equipment or techniques. MicroRNA is a cellular RNA fragment that binds to and destroys the messenger RNA that would have produced a particular protein.

“One of the things that we have achieved here is the conceptual design of a transgene that is structurally very simple,” Peruzzi said. “As a consequence, it’s very, very easy to reproduce and to follow, and works beautifully.” An additional advantage, he added, is that most of the work is done by computer rather than with repetitive and often finicky iterations of molecular cloning.

Ten months earlier, Peruzzi’s research team reported in Nature Communications success in using this novel method to co-opt the molecular machinery of GBM cells in a way that made them more vulnerable to treatment.

His lab had hypothesized that three microRNAS worked together as a team in healthy neurons but were lost during formation of brain cancer. Using their process for creating artificial microRNA clusters and delivering them via viral vector, the microRNAs were delivered to intracranial GBM in mice.

Mice with GBM that received the treatment showed a five-fold increase in their response to chemotherapy. Peruzzi’s ongoing work has National Institutes of Medicine (NIH) support to further develop this technique and bring it into human trials for GBM.

Sharing a “Simple” Technique for Building a MicroRNA Cluster and Vector

This evidence in mice suggested that a transgenic cluster of functionally associated microRNAS showed promise for therapeutic purposes — a concept that could be applied to any number of tumors and diseases that likely involve multiple genes, including Parkinson’s and Alzheimer’s.

While other researchers have tried to deliver a combination of genes in a viral vector, the methods require lengthy explanations of challenging techniques, which may be daunting for every day experiments, Peruzzi said. But the ease of implementing his lab’s technique — and its potential to apply it to numerous other cancers and disorders — prompted his decision to share it widely through Nature Protocols.

Peruzzi’s team did not necessarily expect to devise such a simple, reproducible model of creating transgenes when they began their work. But as they set out to validate their hypothesis regarding the role (and potential therapeutic value) of a transgenic cluster of microRNAS in GBM recurrence and resistance, they encountered a relatively simple way to alter cell regulation.

“It turned out that our hypothesis was real,” Peruzzi said. “But the second important thing we learned is that the cell has designed a system that is so beautiful and simple that we just have to use it. And, best of all, there is much more to exploit from this system.”

Other Glioma News: Can an Implantable Microdevice Drive Personalized Chemotherapy?

A pilot clinical trial of an implantable, drug-releasing microdevice is now enrolling patients at Brigham and Women’s Hospital. The goal of this trial is to test simultaneously the effect of a diverse battery of cancer drugs placed directly into a glioma, while it is still in its original environment within the brain. With this strategy, it may be possible to determine which drug is most likely to work for that patient’s specific cancer.

“Even though we may call a glioma the same name in different patients, each tumor has its own features: it has different molecular signatures, different genes — and as such, it can also respond differently to drugs,” Peruzzi said. “The goal here is to find a way to test the available drugs, in the most accurate way possible, which is using the patient as its own personal lab.”

The trial is a collaboration between Peruzzi and researcher Oliver Jonas, PhD in the hospital’s Department of Radiology. The Jonas Lab, which designed the microdevice, specializes in innovative biotechnologies for next-generation precision medicine.

The cylindrical microdevice is the size of a pencil tip. It includes multiple stacked compartments – one for each of eight approved drugs used to treat gliomas. Patients in the trial must have a Grade II, Grade III or Grade IV glioma.

To test multiple drugs in a patient simultaneously, the device will be implanted in the tumor at the initiation of surgical resection. Upon contact with tissue, the device will release its content, allowing a minute amount of each drug to infuse radially into the tissue.

As the resection is being completed, two to four hours later, the drug-infused tissue will be removed and sent to the lab to determine whether (and how much) each drug damaged DNA and induced other biological changes that can predict the drug’s efficacy for killing cancer cells. This response, combined with the tumor’s specific genetic information, is expected to help inform the best chemotherapy choice for the patient.

“We have a great deal of data on how drugs work in vitro. But by now it’s very clear that what we see in vitro is not necessarily predictive of what actually occurs in vivo, Dr. Peruzzi said.  “That’s why with gliomas we need a more holistic and pragmatic approach.”

The trial will enroll approximately 12 patients.

*This image is a graphical output from the RNAFold WebServer of a transgene containing the chimeric microRNA hairpins of miR-128, miR-124, and miR-137 (cluster 3). Red arrowheads represent the key sequences recognized by the cellular machinery to correctly release the active microRNAs from the transgene.