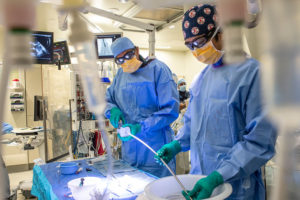 In the last decade, there has been rapid progress in the treatment of aortic valve disease with catheter-based therapies. For adults with aortic stenosis, transcatheter aortic valve replacement (TAVR) has become commonplace, with Brigham and Women’s Hospital offering the highest-volume TAVR program in New England.

However, developing transcather treatments for mitral valve diseases, such as mitral regurgitation (MR), has been more challenging, in part because the mitral valve is more complex and more difficult to access compared to the aortic valve.

“The Holy Grail in non-surgical catheter-based valve interventions is to develop a transcather mitral system that can treat MR like TAVR treats aortic stenosis. Many devices are being evaluated in feasibility studies, and the Brigham is involved in many of them,” says Pinak Bipin Shah, MD, director of the Cardiac Catheterization Lab.

Currently, the only FDA-approved transcatheter device used to repair the mitral valve is the MitraClip®, designed to treat select patients with mitral valve regurgitation, which is the most common heart valve disease among U.S. adults older than 55 years.

“Following on the legacy of renowned cardiac surgeon, Lawrence H. Cohn, MD, who pioneered mitral valve repair and performed the first minimally invasive valve operation in New England, the Brigham has established a long history of excellence in the mitral valve space and performs the highest volume of procedures in New England with more than 50 per year,” says Prem S. Shekar, MD, chief of the Division of Cardiac Surgery at Brigham and Women’s Hospital.

To evaluate the MitraClip®, Brigham researchers were involved in the Everest II trial, which compared transcather mitral repair versus surgical therapy for patients with prolapse of the mitral valve. As part of the Cardiovascular Outcomes Assessment of the MitraClip Percutaneous Therapy (COAPT) trial, Brigham and Women’s was also a key site in the evaluation of MitraClip® as a suitable alternative to medical therapy in patients with secondary mitral regurgitation and heart failure.

“As indications for the MitraClip® expand, the Brigham is assessing a variety of technologies that will hopefully help patients with mitral disease do better in the long term,” says Dr. Shah.

Moving beyond the commercially available MitraClip®, Brigham and Women’s is now participating in several clinical trials that are exploring the safety and effectiveness of transcatheter mitral valve replacement (TMVR), which could offer a less-invasive approach than open heart surgery for eligible patients with mitral valve regurgitation.

“Brigham and Women’s has established itself as a go-to place for the device companies and is at the forefront of clinical trials evaluating new mitral valve technologies. We’re working hard to bring the newest technology to patients as fast as we can,” says Patrick T. O’Gara, MD, a senior physician within the Division of Cardiovascular Medicine.

As a part of the multicenter APOLLO Trial, for example, Brigham’s cardiac surgeons and interventional cardiologists are comparing the Medtronic’s Intrepid® transcatheter mitral valve replacement (TMVR) system’s effectiveness against traditional surgery. The APOLLO trial evaluates the placement of a mitral valve made from bovine tissue using a transcatheter technique. Results for APOLLO’s primary outcome—the composite of all-cause mortality, disabling stroke, reoperation or reintervention, and cardiovascular hospitalization at one year—aren’t expected until 2020.

The Brigham is also actively recruiting patients for enrollment in the CLASP II Trial that is investigating a new mitral clip device that may offer easier clip placement compared to the MitraClip®.

“While we are evaluating several transcatheter mitral systems, we are still in the early stages with these devices. That said, I think the number of devices that we are going to be able to offer patients in clinical trials for mitral valve pathologies is going to increase significantly in the next two years,” says Dr. Shah.

Most recently, the Structural Heart Disease Program has been asked to be involved in two large clinical trials that evaluate catheter-based mitral systems. One trial involves a mitral repair system that is placed on the annulus of the valve to bring the leaflets together. The second mitral repair technology involves a device that sutures the annulus to decrease leakage.

“We are fortunate enough to have a strong partnership between cardiac surgery and interventional cardiology. It’s our multidisciplinary approach to treating valvular heart disease that gives the Brigham the edge in New England and beyond,” says Dr. Shah.

In order to offer these new transcatheter procedures, interventional cardiologists and cardiac surgeons must also work closely with advanced imaging experts, including cardiac anesthesiologists to guide devices to the heart valves.

“The Brigham has one of the top noninvasive cardiovascular imaging programs in the United States that utilizes advanced 3D echocardiography, cardiac CT and cardiac MRI to help evaluate patients and guide interventional procedures,” says Dr. O’Gara.

In 2019, the Cath Lab expanded to offer five new state-of-the-art rooms. The extra clinical space allows the Interventional Cardiology Program to meet an increasing demand for less-invasive procedures, such TAVR and mitral systems under investigation.

According to Dr. Shah, the question for the cardiology community going forward is: “When will be able to treat the mitral regurgitation like TAVR treats the aortic stenosis?”

“We are close to having commercially available catheter-based mitral systems that could allow us to routinely repair the mitral valve. It might be 5-to-10 years before we have a transcather replacement option,” says Dr. Shah.

In the meantime, physicians at Brigham and Women’s are continuing to investigate the safety and feasibility of new mitral systems and are learning more with each trial and iteration of the existing technologies.

“The aortic valve was first, and the Brigham is leading the field in offering TAVR to patients with aortic stenosis. The mitral valve is more complicated, but it’s only a matter of time before we conquer this space, too,” says Dr. O’Gara.