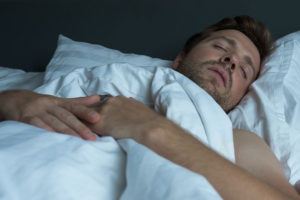 Clinicians at Brigham and Women’s Hospital are using hypoglossal nerve stimulation (HNS) to treat obstructive sleep apnea (OSA) in patients who struggle to tolerate the first-line therapy, continuous positive airway pressure (CPAP). The Brigham is a leader in using the novel procedure, which involves surgically implanting a device in patients to relieve apnea episodes. HNS offers hope to those with OSA who are intolerant to CPAP.

“Obstructive sleep apnea causes more than just a restless night in bed,” said Anthony Prince, MD, an otolaryngologist in the Division of Otolaryngology-Head and Neck Surgery at the Brigham. “It can put stress on several organ systems and has been associated with numerous long-term health consequences including high blood pressure, heart disease, diabetes, headaches, mood disorders such as depression, memory loss and stroke.” Untreated OSA is also associated with a significant financial burden on society with decreased productivity and increased absenteeism, as well as increased mortality. Untreated sleep apnea also impacts the affected person’s bedmate and can worsen their sleep quality, daytime functioning and quality of life.

OSA is a common condition in which muscles in the back of the throat relax during sleep, blocking the upper airway. It’s typically associated with snoring and, most disturbingly, episodes of stopping breathing during sleep. This can happen numerous times an hour. An estimated one in 15 Americans has sleep apnea. The prevalence is significantly higher in people who are overweight or obese. In some studies, as many as half of patients started on CPAP may have difficulty using it regularly. While close monitoring, motivation and empathetic management by the physicians and the staff in the Division of Sleep and Circadian Disorders at Brigham and Women’s Hospital ensure that this number is much lower at this clinic, there are still several patients who have intolerance to CPAP or can’t use it for various reasons.

According to Dr. Prince, HNS is ideal for patients who have not had success with CPAP. Patients must meet certain criteria for airway anatomy and have a body mass index of less than 32, excluding morbidly obese people. Those with mild or very severe sleep apnea also may not be candidates for this therapy.

“Patients with moderate or severe OSA who fail medical management can be candidates for surgery,” he said. “However, traditional surgical procedures to treat the condition—such as uvulopalatopharyngoplasty (also known as UPPP and UP3) and tongue base reduction—haven’t been as effective as we would like and carry risks due to their invasive nature and painful recovery.”

With HNS, a pacemaker-like device is implanted in the patient’s upper chest and connected to two leads. One lead, implanted near the ribcage, detects respiration. The other lead is implanted along the hypoglossal nerve and connected to the nerve branches that propel the tongue forward and stiffen it. Once the device is activated, it detects the patient’s breath and stimulates the hypoglossal nerve to move the tongue forward, opening the back of the throat and relieving the apnea event.

The surgical procedure, which requires three small incisions, is often done on an outpatient basis, though some patients may remain in the hospital overnight for observation. Because the procedure doesn’t directly involve the upper airway (throat, tongue or tonsils), patients can resume their regular diet immediately after surgery.

According to Dr. Prince, a pivotal 2014 randomized control study of the HNS device found a significant reduction in patients’ apnea-hypopnea index (AHI). AHI is a sleep apnea severity scale for OSA that measures the number of times a person stops breathing during sleep associated with a significant decrease in oxygen saturation. The first patient to undergo the surgery at the Brigham saw his AHI go from a 26 times per hour before the procedure (considered “moderate” sleep apnea) to a 0 afterwards, based on a postoperative sleep study.

Dr. Prince said he looks forward to bringing this novel procedure to more patients. He is working closely with colleagues in the Division of Sleep and Circadian Disorders to identify patients and determine their suitability through drug-induced sleep endoscopy, a preoperative procedure that assesses the patient’s upper airway anatomy.

“The program represents a joint initiative by Brigham’s Division of Sleep and Circadian Disorders and Division of Otolaryngology,” said Rohit Budhiraja, MD, a sleep medicine specialist at the Brigham. “Our partnership ensures top quality medical and surgical management of these patients both before and after the surgical procedure.”

“This has been a wonderful collaboration between otolaryngology and sleep medicine at the Brigham,” Dr. Prince concluded. “It is a good example of how the Brigham is embracing cutting-edge, evidence-based technology to offer previously unavailable treatments that help significantly improve the lives of our patients.”