When a 54-year-old woman arrived at Brigham and Women’s Hospital, cardiovascular experts at the Heart & Vascular Center (HVC) discovered that her left main and right coronary arteries were 99 percent blocked.

Too sick to survive coronary bypass surgery, the woman was rushed to the Cardiac Catheterization Lab, where she was offered a 20 percent chance of survival, not only because of her blocked coronary arteries, but because she also had a complex medical history. She had lived with diabetes from age 11 to 36, eventually requiring her to undergo a kidney and pancreas transplant. She received a second kidney transplant after the first organ failed.

“When this woman arrived at the Brigham, she was in cardiogenic shock, had at least one heart attack, and a history of multiple organ transplants. If you put her case into a predictive model, the statistics would not be in her favor,” says Deepak L. Bhatt, MD, MPH, executive director of the Interventional Cardiovascular Program.

Few medical centers would have accepted such a high-risk patient. With a reputation for looking past the numbers, the interventional cardiologists at the Brigham accepted the risks and took the woman into their care.

In fact, few medical centers would have accepted such a high-risk patient, according to Dr. Bhatt. With a reputation for looking past the numbers, the interventional cardiologists at the Brigham accepted the risks and took the woman into their care.

Within the Cardiac Catheterization Lab, the woman was placed on the peripheral bypass machine, extracorporeal membrane oxygenation (ECMO).

With one of the leading programs in the United States for the treatment of cardiogenic shock and chronic total occlusions (CTOs), Dr. Bhatt and the team performed a minimally invasive percutaneous coronary intervention (PCI), placing stents in five major coronary arteries to open her blocked coronary arteries and large branches.

The Brigham is a Leader in Treating High-Risk Cardiac Cases

While the PCI procedure didn’t involve open-heart surgery, it was still extremely risky due to the patient’s frail state and complicated medical history. 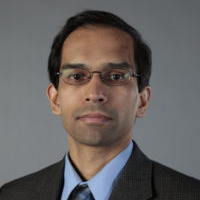 “I remember telling her family that I didn’t think she was going to make it through the procedure. But she had no other options and death would have been the natural course. We couldn’t just leave her untreated,” says Dr. Bhatt.

With a culture of looking past the statistics, Dr. Bhatt and Brigham interventional cardiologists have been performing the most challenging and highest-risk procedures in New England for years.

Among the potential complications that could have occurred during the procedure, Dr. Bhatt also had to consider how it might affect the woman’s transplanted organs. The contrast dye used to guide the stents could have taxed her donor kidney and led it to fail. Fortunately, she experienced no complications.

Against all odds, she survived the high-risk PCI procedure and recovered.

A week after the first surgery, she returned to the Cardiac Catheterization Lab to have three more stents inserted in her coronary arteries. After discharge, she sought care with James Muller, MD, a Brigham cardiologist, and saw him regularly as she underwent cardiac rehabilitation.

A potential risk for sudden cardiac death, she received a LifeVest® wearable cardioverter defibrillator (WCD) that continuously monitored her heart and would deliver a shock had she experienced a life-threatening arrhythmia. After two months of negative echocardiograms, her LifeVest was removed.

After four months, the woman was home and regaining independence. Her cardiac function has since returned to near-normal levels.

“Given the limits of medicine, I have to accept that we can’t win every case, but seeing this patient thrive makes all the challenges seem worthwhile. It makes me feel great that she’s alive and enjoying life with her family,” says Dr. Bhatt.