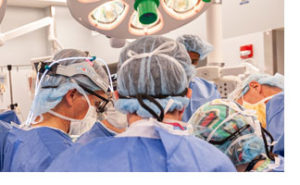 Robert Chelsea, a 68-year-old man from California, came to the Brigham with disfiguring facial injuries resulting from a traumatic, fiery car crash six years earlier. After the accident, Chelsea went through over 30 surgeries, yet his face remained severely scarred. His lips, part of his nose and part of his left ear couldn’t be reconstructed, limiting his ability to eat, drink, smile and speak normally.

Donald J. Annino, MD, DMD, from the Division of Otolaryngology-Head and Neck Surgery, was among those responsible for attaching the donor face to Chelsea and making sure he regained optimum function after the procedure. His surgical expertise related to the microvascular and facial nervous systems made him a key part of the surgical team.

“Otolaryngology expertise is crucial to helping face transplant recipients resume breathing, swallowing and speaking function,” Dr. Annino explained. “We focus on how and what the patient is eating, how they are breathing, how their tongue functions and how well they can communicate both before and after the procedure. We also closely evaluate the facial nerves to determine the specific nerve branches that need to be harvested from the donor face in order to achieve that optimum function.”

“Our experience has demonstrated that face transplantation is a viable option for patients with severe disfigurement and limited function who have no alternatives,” Dr. Pomahac said. “We recently published a follow-up study of the first patients to receive a face transplant at the Brigham, which showed they had a robust return of facial motor and sensory functions, allowing them to socially reintegrate in a way that would not have been possible pre-transplant.”

Face transplantation is not a first-line treatment and is never considered for strictly aesthetic reasons. To be a candidate, a patient must have severe functional limitations, sometimes following many rounds of conventional reconstruction procedures. Patients must be willing to go through extensive psychological counseling both pre- and post-procedure. In addition, because transplantation requires the patient’s immune system to be suppressed for the rest of their life to keep their bodies from rejecting the donor organ, patients must demonstrate a history of good compliance with medication protocols and other therapies.

Chelsea met the requirements. After an evaluation by the surgical team and an extensive screening process, he began the wait for a donor, a process that took longer than for previous Brigham face transplants due to his skin tone.

“Face transplantation has significant obstacles that don’t exist with transplanting other organs such as livers, lungs and kidneys,” said Dr. Annino. “The donor and the recipient need to be a good match in terms of gender, age and skin tone. Complexion shade can be especially hard to match, even between two African Americans, because the range of skin tones is much larger than with whites.”

Due to the intricacies of blending skin of different shades of the donor’s face with Chelsea’s native one, the decision was made to pursue full face transplant. Once a donor of the same gender, a similar age and a nearly identical skin color became available, the Brigham sprang into action. More than 45 physicians, nurses, anesthesiologists, residents and research fellows assisted during the 16-hour transplantation procedure.

After the surgery, Chelsea began the recovery process. For nearly a month, he remained in the hospital, monitored closely by Brigham transplant medicine and infectious disease physicians for signs of rejection. Under the direction of Dr. Annino, occupational therapists helped him regain the ability to swallow after his tracheotomy and feeding tubes were removed.

“One of our goals was to make sure he was able to ingest proper nutrition while also protecting his airway,” said Dr. Annino.

Upon leaving the hospital, Chelsea convalesced nearby, continuing therapy and starting a lifelong immune-suppression medication protocol crucial to preventing infection.

“Our social workers found a temporary apartment in Boston, and a couple of his family members came to help with his follow-up care,” Dr. Annino said. “His recovery went very well, and he was able to return home to California two-and-a-half months after surgery.”

According to Dr. Annino, Chelsea is not the first face transplant patient to come to the Brigham from outside of Massachusetts. Eight of the Brigham’s nine face transplant recipients have hailed from other regions of the country.

“The foundation of the Brigham’s leadership reputation in face transplants is strong,” he concluded. “We have a well-established transplant center with an extensive history of transplants in general, along with the institutional knowledge, specialized surgeons and multidisciplinary teams needed to achieve good results. When people have a choice, they choose Brigham and Women’s Hospital.”