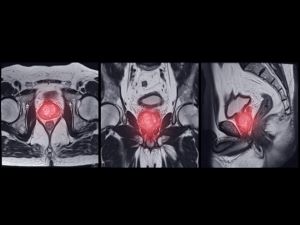 Investigators at Dana-Farber Brigham Cancer Center have uncovered a potentially serious flaw in the current standard of care for patients with positive pelvic node prostate cancer (pN1 PC). They found that adjuvant radiation therapy (aRT) is associated with a decreased risk of death compared with early salvage radiation therapy (sRT) in men with four or more positive lymph nodes. Moreover, the reduction increases by 8% for each additional positive pelvic lymph node found at surgery.

The game-changing multicenter study, published in the Journal of Clinical Oncology, was led by Anthony Victor D’Amico, MD, PhD, chief of Genitourinary Radiation Oncology at Dana-Farber Brigham. He explains that a study conducted a decade ago in Italy came to the opposite conclusion: that men with four or more positive lymph nodes would receive no benefit from aRT.

Addressing a Lack of Evidence With Sophisticated Analysis

The lack of evidence to guide optimal timing of post radical prostatectomy radiation therapy in men with pN1 PC drove Dr. D’Amico and his colleagues to conduct the study. Although men with pN1 PC are at high risk for recurrence after surgery and at increased risk of mortality from prostate cancer, very few men with pN1 disease were included in three prior randomized trials and accompanying meta-analysis that compared the impact of aRT with sRT on progression.

“These are men with undetectable levels of prostate-specific antigen (PSA), which suggests that they do not have any residual disease, although in many cases they do,” Dr. D’Amico says. “We wanted to know if the risk of dying from prostate cancer could be reduced if those men are treated immediately instead of waiting until their PSA becomes measurable. Does waiting mean we lose the chance for a cure?”

To answer that question, Dr. D’Amico and his team studied a cohort of 17,913 men (median age of 64 years) consecutively treated between 1995 and 2017 with radical prostatectomy and pelvic lymph node assessment and then followed for possible treatment with aRT or early sRT.

The investigators conducted a range of sophisticated statistical analysis techniques, including:

After a median follow-up of 7.02 years, aRT compared with early sRT was associated with a significantly lower ACM risk equaling 8% per unit increase in positive pelvic lymph nodes. A significant difference in the seven-year adjusted ACM estimates favoring aRT versus early sRT was observed in men with four or more positive lymph nodes. However, this was not true for men with one to three positive lymph nodes, given the difference favoring aRT in these men was small (1–3% at seven years).

“We are excited that our results will have the potential to change practice and lengthen survival for men with node-positive prostate cancer,” Dr. D’Amico says. “We suggest weighing the potential short- and long-term toxicity of pelvic RT against the possible but modest absolute reduction in the risk of ACM when considering its use in men with one to three positive lymph nodes.”

What About Patients With More Favorable Disease?

Now that the aRT-versus-sRT study has been completed and published, Dr. D’Amico is turning his research eye toward patients whose prostate cancer has not spread to the lymph nodes. He wants to investigate the impact on the risk of death when waiting until PSA levels are at least 0.3 ng/ml in these patients before performing prostate-specific membrane antigen PET scan imaging to detect residual disease.

“Dana-Farber Brigham provides an ideal platform for the prostate cancer research and clinical innovation that can improve patient outcomes,” Dr. D’Amico says. “Our thought leadership and statistical manpower allow us to conduct the type of studies that have the ability to impact practice”