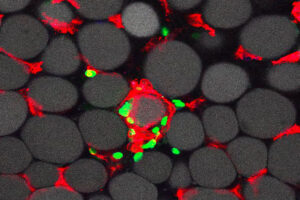 Obesity is linked to an increased risk of many diseases, but much remains unknown about the molecular mechanisms underlying this connection. In a new study from Brigham and Women’s Hospital and Harvard Medical School, investigators have found an unexpected role for cholesterol and its effects on the immune system in driving some of these obesity-linked diseases — in particular, with conditions characterized by autoimmunity.

The association turns out to be mediated by interleukin-17 (IL-17), a cytokine that provides important protection against infections. When produced in excess, however, IL-17 is associated with autoimmune-related diseases including psoriasis, rheumatoid arthritis and multiple sclerosis.

Dr. Lynch’s lab studies the effects of obesity and diet on the functions of immune cells. Her previous work found that obesity doesn’t affect every type of immune cell in the same way. “It’s not that obesity impairs all immune cells,” she said. “Instead, it skews them toward being IL-17 producers and therefore less cytotoxic, as it impairs natural killer cells and other cells that are associated with recognizing and fighting infections and cancer.”

In the current work, the researchers found the cells that produce high levels of IL-17 have lipid droplets inside of them, which is not typical of immune cells. Furthermore, mice that were fed a high-fat diet had higher IL-17 production. Alternatively, levels of IL-17 could be reduced by blocking lipid uptake in the mice.

When the team took a closer look at the type of lipids inside the cells, they discovered that in addition to triglycerides and fatty acids, which were expected, the cells contained cholesterol droplets. “It appeared that cholesterol was particularly associated with these IL-17-producing cells, suggesting a possible link between high cholesterol and IL-17-related diseases like psoriasis,” Dr. Lynch explained.

Dr. Lynch pointed out that one important aspect to note about the connections between obesity and disease is that the effects of obesity on the immune system are not the same in every individual. Other factors are involved as well.

Although cholesterol appears to be associated with increased IL-17, the approach of treating high cholesterol to lower disease risk may not be so straightforward.

“We know that weight loss is associated with reduced IL-17, so lowering cholesterol through diet is probably beneficial,” Dr. Lynch said. “However, our early work has suggested that it may not be that simple. That’s because lowering cholesterol seems to cause these cells to start making their own lipids and cholesterol if they can’t take them up from the environment.”

She added, however, that much more work is needed before this connection can be fully understood.

Findings from this research have implications beyond autoimmune disorders. Previous work in Dr. Lynch’s lab focused on the role of the immune system in relation to obesity and cancer — specifically, how the cellular environment in people with obesity impairs immunosurveillance. This earlier research, which has suggested that metabolic reprogramming of natural killer cells may improve cancer outcomes in people with obesity, also has implications for immunosurveillance more broadly, including the connections between obesity and infectious diseases like COVID-19.

Research like Dr. Lynch’s is also helping to fuel treatment at the Brigham’s Center for Weight Management and Wellness, which offers medical, endoscopic and surgical weight management services and interventions. Caroline Apovian, MD, co-director of the center and a physician within the Brigham’s Division of Endocrinology, Diabetes and Hypertension says that research like this is instrumental in helping to understand what mechanisms cause patients with obesity to develop certain diseases.

“The more we understand about the triggers for certain obesity-linked disease’s, the better equipped we are to help our patients and adapt our treatment approaches.”