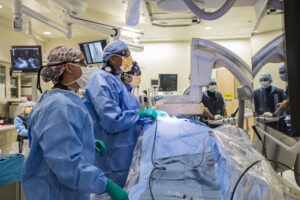 Over the past decade, transcatheter aortic valve replacement (TAVR) has evolved from a high-risk procedure to one that has become a standard of care. Each year, thousands of patients undergo this minimally invasive procedure.

Recently, however, a multidisciplinary team of specialists at Brigham and Women’s Hospital planned and performed a TAVR procedure that was anything but standard: The 78-year-old patient had a congenitally corrected transposition of the great arteries (cc-TGA), a rare condition.

In 2008, the patient’s cardiologist in Maine referred them to the Brigham for replacement of the tricuspid valve. The valve, which was on the left side of the heart rather than the right due to their cc-TGA, was no longer able to withstand the pressure of essentially functioning as a mitral valve. When the patient was referred to the Brigham again in 2020, the ventricle that supplied blood for systemic circulation was found to be weak. Further studies revealed the aortic valve had developed severe calcification and become severely stenotic, resulting in pressure overload in the ventricle.

“The patient was not felt to be a good surgical candidate by the doctors in Maine because of the prior operation, the complexities of the congenital condition and the patient’s age,” said cardiovascular medicine specialist Pinak Bipin Shah, MD, director of the Interventional Cardiovascular Disease Training Program and director of the Cardiac Catheterization Laboratory at the Brigham. “The patient was sent to us to determine if we could safely perform TAVR.”

Upon arrival at the Brigham, the patient underwent an extensive evaluation in conjunction with several medical teams: cardiac imaging, interventional cardiology, cardiac surgery, adult congenital heart disease and advanced heart disease. “We put our heads together to figure out what diagnostic testing was needed and to come up with a plan for the patient’s survival,” Dr. Shah said.

The patient’s congenital defect meant that undergoing TAVR was especially high-risk. “The anatomy of the heart was rather atypical,” said Tsuyoshi Kaneko, MD, a surgical director of the Structural Heart Disease Program and a cardiac surgeon who specializes in endovascular approaches. “The aortic valve was more toward the left side of the heart. But with the expertise of our Structural Heart Disease Program as well as the anesthesiology team, we were able to do the procedure safely.”

The patient’s heart failure likely was due to the combination of the cc-TGA and the stenotic aortic valve. In people with cc-TGA, the right ventricle must maintain systemic pressure for the whole body, not just the pressure needed to pump blood to the lungs.

“Over time, that right ventricle wears out. It doesn’t have the motor to sustain the blood supply to the whole body,” Dr. Kaneko said. “The patient’s heart did well with this condition for 78 years, but once the ventricle began to fail, they deteriorated significantly over a relatively short period of time.”

During the TAVR procedure, which was done in the Brigham’s catheterization laboratory, the patient was sedated but did not receive general anesthesia. The complex anatomy that switched the ventricle and the great arteries made the procedure complicated. However, thanks to extensive imaging and preprocedural planning, a balloon-expandable TAVR prosthesis was deployed safely. The team also placed an embolic protection device in from the patient’s right arm, as they were worried about stroke risk due to the high levels of calcium in the blood vessels.

A very limited number of cases of people with cc-TGA undergoing TAVR have been reported, and the Brigham team believes this patient is the oldest. “We had a total of five teams involved,” Dr. Kaneko said. “Although the procedure carried high risk, we were confident that by leveraging the expertise of all the teams involved, the benefits for this patient would greatly outweigh the risks.”

A postoperative echocardiogram revealed the gradient across the valve was much better than what the patient had had before. The patient required dobutamine for the first few days due to their poor ventricular function but was discharged four days after the procedure. At the time of discharge to Maine, the patient reported tremendous symptomatic relief, was eating and sleeping well and no longer felt short of breath with exertion. Fatigue also improved dramatically.

“The fact that we treated a patient who would have had no treatment option a decade ago shows the vast treatment possibilities offered by our team,” Dr. Kaneko concluded.