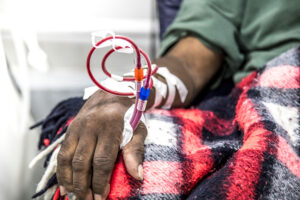 The researchers say the “race multiplier factor,” which is used as part of the Chronic Kidney Disease Epidemiology Collaboration (CKD-EPI) and Modification of Diet in Renal Disease (MDRD) equations to estimate kidney function, can contribute to health disparities in African Americans with CKD. This is particularly important because African-American patients with CKD are known to have worse clinical outcomes with respect to hypertension control, timely nephrology referral, dialysis fistula or graft placement, adequate dialysis treatment and transplantation access.

“The race multiplier is something that all of us were taught to use during medical school and residency training,” said Mallika L. Mendu, MD, MBA, a Brigham nephrologist and senior author of the study, published in October in the Journal of General Internal Medicine (JGIM). “I was surprised to learn how many patients are impacted by the use of the race multiplier and its potential implications on care delivery, particularly referral to kidney transplantation.”

Changing the Math Results in Reclassification of CKD

The calculation in question uses serum creatinine levels to obtain the estimated glomerular filtration rate (eGFR). To account for differences among individuals, the equation includes factors for age, sex, weight and race to improve statistical precision.

Earlier research suggested African Americans had higher measured glomerular filtration rate with the same creatinine levels, leading to the adjustment. But there was no clear biological explanation for why it would be different, Dr. Mendu said.

The new JGIM study led by Dr. Mendu analyzed data and electronic health records from 56,845 patients who were in the Partners HealthCare system’s CKD registry as of June 2019; 2,225 of them self-identified as African American. The researchers recalculated eGFR for these patients, removing the race multiplier of 1.159, and classified the severity of the patients’ disease based on the revised eGFR numbers.

They found the race multiplier essentially designated African-American patients as being healthier than people of other races who had the same clinical findings. Overall, one in three African-American patients was reclassified to a more severe stage of disease when the multiplier was removed. One-quarter of them were moved from Stage 3 to Stage 4.

Differences in staging of patients with more advanced disease ultimately could affect whether they were considered for transplant surgery, the researchers said. Notably, 64 African-American patients were reclassified to an eGFR less than or equal to 20 (a common threshold for kidney transplant referral), but none had a referral. This indicated to Dr. Mendu and the co-authors that there were real, potential adverse consequences to using the race multiplier that could exacerbate disparities.

A Focus on Reducing Health Disparities

Dr. Mendu said the findings from this study may help advance the use of cystatin C as a marker for CKD instead of creatinine. She considers cystatin C to be another acceptable measure of eGFR, as this test does not use a race adjustment factor. The Brigham has always been a leading institution when it comes to CKD treatment, she noted, adding that changing the way patients with CKD are staged and ensuring health equity are other key areas in which the institution can play a pivotal role.

“There are so many complicated issues related to race in medicine and health disparities, something that the COVID-19 pandemic has made very clear,” Dr. Mendu concluded. “But this is one problem we think is quite solvable.”