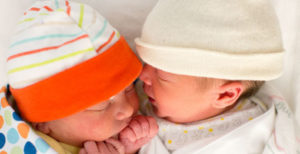 In the face of rising Cesarean section rates – including nearly all twin births, obstetrician Daniela Anne Carusi, MD, MSc, and colleagues at Brigham and Women’s Hospital (BWH) questioned whether Cesarean delivery was warranted for all twins.

“A lot of women having multiples are avoiding labor. We felt that a lot of these patients probably could have successful vaginal deliveries,” said Dr. Carusi, director of surgical obstetrics in the Department of Obstetrics and Gynecology at BWH. “We wanted to know how patients were doing when they did attempt vaginal deliveries, and we wanted to generate some data that would help us to counsel patients with – and hopefully share that with other providers. We wanted to be able to tell women: If they were to try to give birth vaginally, what’s the chance that they would succeed?”

To define best candidates for vaginal delivery of twins, BWH physicians looked retrospectively at 450 women whose babies were vertex-vertex when labor began and who delivered the presenting twin vaginally. In the study, published last year in Obstetrics & Gynecology, 55 women (12 percent) had intrapartum presentation change of the second twin – a concern that deters many women and physicians from a trial of labor. The researchers determined that multiparity and gestational age under 34 weeks were associated with intrapartum presentation change of the second twin.

Among first-time mothers whose twins were both head down at the start of labor and more than 34 weeks gestational age, 97 percent remained vertex-vertex. “Now we know that these women shouldn’t be discouraged from trying,” Dr. Carusi said.

In a prior retrospective study, Carusi and BWH colleague Sarah Rae Easter, MD and Ellice S. Lieberman, MD, DrPH found even higher rates of vaginal delivery — more than 80 percent — when the second baby was known to be breech at the beginning of labor. With time to bring in a physician who was experienced in breech deliveries, the team and the patient were comfortable proceeding with a vaginal delivery. “We were prepared for it,” Dr. Carusi said. “When you’ve got the right people in the room, you can be successful.”

Two physicians who run the BWH multiples clinic, Julian N. Robinson, MD, and Carolina Bibbo, MD, often attend a twin birth if a mother, who has a low risk profile and is appropriately counseled, wishes to try vaginal birth of twins. BWH performed 202 twin deliveries in 2016, with a 56 percent rate of vaginal birth amongst those twins eligible for labor.

But across the United States, the diminished number of physicians who are experienced in breech deliveries may be a limiting factor. “Patients may want to make the choice to deliver where there is breech experience,” said Dr. Carusi.

To ensure that the art of breech delivery is not lost, BWH trainees practice and get the feel for breech presentations by using a life-size simulation model of mother and baby. It’s valuable knowledge, said Dr. Carusi, for the rare situations of a sudden breech presentation with a singleton, as well as for twin vaginal delivery.

“Anywhere you have providers who feel empowered to deliver a single baby in breech position also will feel comfortable delivering a second twin that is breech,” said Carusi. “If a woman wants a vaginal delivery, we can help her do that.”