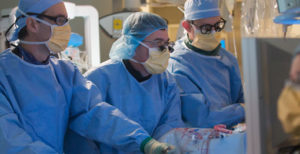 The faster imaging and image manipulation of the Pheno compared with its predecessors are especially important for the complex procedures that are done in the hybrid operating room. This is where a patient with vascular occlusions in both the pelvis and the leg can undergo angioplasty with stent placement for the pelvic occlusion and bypass surgery for the leg occlusion all in one operating session.

“With this new-generation system, we can do these complex hybrid procedures even more safely and efficiently,” said Michael Belkin, MD, chief of the Division of Vascular and Endovascular Surgery. “Both patients and doctors are exposed to less radiation than with earlier systems.”

The Pheno system scans up to 15 percent faster than earlier systems, which means that images are produced using less intravenous contrast media. “Faster scanning results in better patient safety because it requires less contrast media to be filtered by a patient’s kidneys,” Dr. Belkin explained. In addition, its clinical software application can produce three-dimensional images that use less contrast media.

The image quality and ability to manipulate images are also vastly superior to previous iterations, with four times higher resolution for two-dimensional imaging.

“With the old device, if we needed a higher resolution image, we had to use a higher radiation dose,” said Dr. Belkin. “Now we can just electronically magnify an image to get better resolution.”

Digitally manipulating images during the procedure is also faster and easier. “I can electronically superimpose a preoperative CT scan that was done here or elsewhere over live angiography images during a procedure to produce an overlaid 3D image,” explained Dr. Belkin. “This gives me a 3D roadmap for the procedure before I give the patient even one ounce of contrast dye.”

The single large monitor of the Pheno can display 22 inputs, including live images, previously obtained images, and vital signs. “Before, we had several individual monitors to view different images and inputs,” said Dr. Belkin. “With the single large screen, we can easily mix and match images, as needed.”

Obtaining images during the procedure is also easier thanks to the smoother steerability of the robotic C-arm that moves more easily in and out of the patient field without interrupting the sterile surgical field. With wider-space memory positions, the C-arm can move out of the operating area quickly and back to the same position for further imaging during the operation.

“The whole motion of the device is superior for our ability to image the complex angles that we need to see in the hybrid operating room,” said Dr. Belkin.

With installation of this cutting-edge imaging system to guide complex procedures, Brigham and Women’s Hospital continues to bring pioneering technologies into the hybrid operating room to provide the most advanced care to patients.