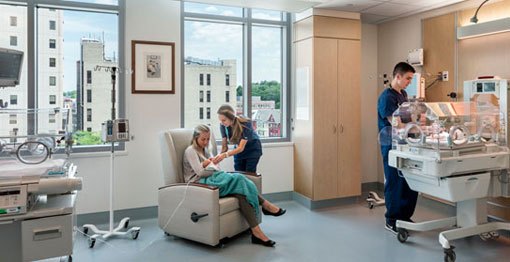 The multidisciplinary NICU Follow-Up Program at Brigham and Women’s Hospital now provides close, frequent monitoring and needed services including care for neurological development to ensure that children thriving and meeting developmental milestones. Additionally, specialists in the Program help parents navigate a transition to continued care after their baby leaves the hospital.

The comprehensive outpatient clinic, opened in November 2017, follows infants from the NICU through toddler years. A companion to the hospital’s expanded, pioneering NICU, the Follow-Up Program also provides long-term data on advanced neuromonitoring and other technologies used in the 60-bed, Level 3 NICU.

The Follow-Up Program is open to all children who are at risk of ongoing medical or developmental complications, whether they had a NICU stay or not. Three basic goals include:

An infant’s first visit with the Follow-Up Program occurs within weeks of discharge. Subsequent evaluations continue every four to six months until the child is approximately three years old. Each visit includes a medical and neurodevelopmental assessment. The child also may be assessed by a nutritionist, a physical therapist, a speech and language pathologist (who assists with feeding and swallowing needs), and a clinical psychologist. Each provides feedback to the child’s parents and pediatrician and may advocate for additional specialty care through the state’s Early Intervention Program or elsewhere.

“The hope is that this close attention to growth and developmental intervention will impact long-term neurodevelopmental outcomes,” said Dr. Benjamin, who directs the Follow-Up Program. “We see children more frequently, with more specialists, than most follow-up programs. We first see them two weeks after leaving the NICU. The next scheduled visit is four months later, but if we’re worried about that baby for whatever reason we’ll see them back much sooner. We have the luxury of being able to see children more frequently.”

Early and close monitoring also provides a framework for research into outcomes of children who are at risk of ongoing medical or developmental complications. It also provides a feedback loop for continuous NICU improvement and use of new technologies, including brain cooling for newborns who show signs of brain injury and sophisticated brain monitoring via cEEG, aEEG, and NIRS (Near Infra-Red Spectroscopy). Continuing to collect data long after discharge may inform best practices.

“It all feeds back to what we do in the NICU,” said Dr. Benjamin. “We need to know how our interventions in the NICU are affecting the babies and children long-term. We want to know that if a child received a certain medication or treatment, is there a particular effect at age two years, five years, seven years?”

Other feedback has been quick: Within months of the program’s launch, Dr. Benjamin and colleagues heard that families wanted better feeding instructions and more post-discharge support – both of which could be implemented quickly.

In the program’s first six months, 149 children have been seen. This volume is higher than expected for the clinic, which is expanding its hours in response. The no-show rate of only eight percent is lower than the 15 to 20 percent in similar programs.

What advice might Dr. Benjamin offer to other hospitals seeking to start or expand NICU follow-up programs? “The most important thing is to have buy-in from your hospital and department leadership,” she said. “Our department is extremely interested in long-term outcomes so we can learn the best way to care for the baby in the NICU. We’ve had full support and resources to build the program that we need. That is what is making us successful.”

Even without the same level of resources, NICU follow-up programs can zero in on a smaller range of services, such as a more concise schedule of twice yearly visits with a psychologist and neonatologist, or they can focus on seeing NICU graduates for research studies.

“Ask yourself, ‘What are your goals? What are you trying to provide?’” Dr. Benjamin advised, noting that it is important from the outset to assess what scope is feasible within your organization.

At BWH, one strength is the continuity and familiarity for families and babies. “We’ve been taking care of some of these babies for months – the physical therapists, the speech and language pathologists, and us as neonatologists,” said Dr. Benjamin. “For the parents to be able to come back and see professionals they remember, and for us to have that connection with them, it can mean so much to families.”

For more information about the BWH NICU Follow-Up program call (617) 525-4120 or email nicufollowup@bwh.harvard.edu.