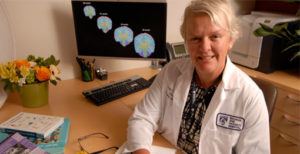 In the newly expanded NICU at Brigham and Women’s Hospital (BWH), advanced monitoring of newborn brain activity and oxygen saturation in the brain tissue provides optimal care and protection.

“We’re moving from the typical measures that look at vital signs — monitoring the heart rate, respiration, blood pressure, and blood oxygen saturation — to looking directly at one of the most vital organs, the brain,” explained Mohamed El-Dib, MD, director of the Neonatal Neurocritical Care Program in the Department of Pediatric Newborn Medicine. “Now neonatologists can monitor the brain continuously and manage the baby based on what they see.”

Dr. El-Dib is an expert in bedside monitoring whose research has focused on cerebrovascular changes and prediction of outcome in premature infants and neuroprotection for neonates with neonatal encephalopathy.

“Babies can’t tell us how they are feeling or whether they are confused or even stuporous,” said Terrie E. Inder, MBChB, MD, chair of the Department of Pediatric Newborn Medicine. “Brain monitoring can help give us important clues for assessing brain injury. We also can detect seizures and track progress of the brain after seizure. And we know that the quicker the baby recovers, the better the long-term health.”

In the newly renovated and expanded NICU at BWH, neuromonitoring protocols for infants at risk of brain injury now include two technologies to help determine whether, and how severely, brain injury has occurred. Both are useful in predicting adverse neurodevelopmental outcomes, informing treatment decisions and mitigating further injury.

cEEG and aEEG (conventional EEG and amplitude integrated EEG) help identify seizures, which may be silent or subclinical. “Ninety percent of the time, you can’t tell if a baby is having a seizure. Some movements may suggest seizure when there is none; other times the baby appears still while actually having a seizure,” Dr. Inder explained. “So, if you aren’t monitoring you don’t know what you are treating. Some babies seize and never get treated. Some get treated but didn’t actually have seizures.”

Her own research and that of others have shown that if seizures are detected and treated, the child’s seizures potentially are decreased by half. It also is becoming clearer that several populations in the NICU are at risk of electrographic seizures, including premature babies and neonates with hypoxic injury or stroke and those at risk of cerebral injury due to cardio-pulmonary risk factors.

NIRS (Near Infra-Red Spectroscopy) is a non-invasive technique that allows for continuous monitoring of tissue oxygen saturation and brain perfusion two to three centimeters directly below its sensors, including in the infant brain. The use of NIRS in the first three days of life in extremely premature infants has been associated with decreased burden of cerebral hypoxia. Using this technology in the NICU consistently enables close monitoring of premature infants, who are particularly vulnerable to changes in their hemodynamics especially in the first days after birth. Moreover, NIRS is frequently used in conjunction with hypothermia (brain cooling) for neonates who have suffered stress to the brain. Because of frequent changes in perfusion soon after birth, babies in the NICU are monitored throughout the three-day cooling.

Neuromonitoring can help determine if a baby is a candidate for hypothermia – a decision that must be made within hours of birth. “The baby might appear well and be fooling us. But we know that after a brain injury, changes occur both in brain electric activity and perfusion. Being able to visualize such changes can provide significant help in the decision to initiate cooling treatments,” said Dr. Inder.

Which babies to monitor, and how?

Both Drs. El-Dib and Inder have published extensively on new neurocritical technologies. But the real challenge, they say is bringing the technologies more broadly to the NICU bedside.

Under their leadership, their department has created Clinical Practice Guidelines for both EEG Neuro-Monitoring and NIRS in the NICU, clearly showing that the technology has moved solidly from research to a clinical tool.

But comprehensive neurocritical care for high-risk babies requires more than guidelines, Dr. El-Dib notes. In addition to the equipment itself and a network infrastructure for remote monitoring, an interdisciplinary team of critical care nurses and physicians must be trained to skillfully use the technologies and to interpret the findings.

The comprehensive neurocritical care program at BWH is the only one of its kind in New England and one of fewer than a dozen nationwide. Drs. Inder and El-Dib have helped in establishing a national interest group to share protocols among centers in the United States, Canada, Europe, Australia and New Zealand.

“You need to know when to monitor, what could go wrong, and how to interpret the monitoring,” said Dr. Inder. “We try to lead this technology training.”