END_OF_DOCUMENT_TOKEN_TO_BE_REPLACED

Yue Liu, MD, a research fellow at the Brigham, Tianyi Huang, ScD, an associate epidemiologist, and colleagues have linked physical inactivity and sedentary behavior with obstructive sleep apnea incidence, suggesting an active lifestyle may have a role in prevention.

END_OF_DOCUMENT_TOKEN_TO_BE_REPLACED 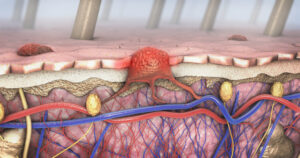 Historically, stage 4 melanoma was considered incurable. In these cases, metastasectomy was performed for only as a palliative measure. But with recent advancements in systemic therapy, metastasectomy has emerged as an effective tool for extending the period of disease control and enhancing overall treatment response. Dana-Farber Brigham Cancer Center is at the forefront of this transformation.

Charles H. Yoon, MD, PhD, FACS, is the director of surgery for cutaneous oncology and melanoma at Dana-Farber Brigham Cancer Center, the cancer center of Dana-Farber Cancer Institute and Brigham and Women’s Hospital. He notes that prior to 2016, stage 4 melanoma had a five-year survival rate of less than 5% and average survival of 13 months. The advent of immunotherapy and targeted therapy has since improved the prognosis, thus expanding the role for surgery.

According to Dr. Yoon, most patients with stage 4 melanoma who receive systemic therapy will have a partial response — the therapy will treat some but not all sites of metastatic disease.

“In that setting, you can carefully select patients who seem to be responding fairly well but have a few sites that remain persistent or enlarging but are surgically resectable,” he says. “By operating and removing the therapy-resistant sites in these patients, we have been able to extend the period of overall response to the systemic therapy. In essence, surgery has become an important adjunct to therapy, and we’re beginning to see more success with it.”

A Regional Leader in Metastasectomy for Melanoma

Dr. Yoon says that Dana-Farber Brigham Cancer Center annually sees over 100 patients with melanoma who are candidates for metastasectomy — one of the largest volumes in the Northeast. Given the center’s extensive experience with these patients, Dr. Yoon and Elizabeth J. Lilley, MD, MPH, then a surgical resident at the Brigham, decided to conduct a retrospective chart review study examining the efficacy of metastasectomy for melanoma.

Using a tissue bank database, Drs. Yoon and Lilley identified patients with stage 3 or 4 melanoma who received preoperative systemic treatment along with metastasectomy between 2010 and 2019. They categorized surgical intent as curative (resection of all metastatic disease), resection of isolated progression or palliative (for symptom relief).

The pair shared study details in a poster presentation at the Society for Surgical Oncology’s 2020 International Conference on Surgical Cancer Care. Among the key findings, overall survival after metastasectomy was 67% at one year and 38% at five years.

“Our review showed that combining surgery in advanced metastatic disease with systemic therapy seems to work fairly well in a population that previously had no options,” Dr. Yoon says. “The dataset is very small, and long-term studies and data on long-term outcomes are not yet available. But given the rapid advances for treatment of metastatic melanoma, there is great optimism for this approach.”

Dr. Yoon and his colleagues at Dana-Farber Brigham Cancer Center continue to explore new ways to optimize the benefits of metastasectomy for melanoma. One area of focus is conducting selective surgery for generation of tumor vaccine or immune cells.

For the time being, Dr. Yoon wants to get the message out that metastasectomy should be a consideration for many patients with advanced-stage melanoma.

“Surgery is clearly becoming more of an option for patients who in the past were deemed inoperable or for whom surgery did not seem to be a good idea prior to the advent of immunotherapy,” he says. “Through a combinatorial approach — using system therapy with surgery — we’re able to buy more time for these patients.”

END_OF_DOCUMENT_TOKEN_TO_BE_REPLACED

By taking the brakes off the immune system and allowing it to attack cancer cells, checkpoint inhibitors have spurred significant advances in the treatment of many people with cancer over the past decade. But for patients who do not respond to these drugs — still the majority of people with cancer — alternative interventions are needed.

A team of investigators from Brigham and Women’s Hospital and MIT is using the power of nanotechnology to develop an entirely new approach for boosting the immune response to cancer. Through the use of field-emission scanning electron microscopy (FESEM), they have learned that cancer cells actually steal mitochondria from T cells — an action that both strengthens the cancer cells and weakens the immune response.

“Nanotechnology is helping us to better understand important basic biological functions,” says Shiladitya Sengupta, MS, PhD, co-director of the Brigham’s Center for Engineered Therapeutics and the study’s senior author. “If we could develop a drug to inhibit this hijacking of mitochondria, it could make immune checkpoint therapy much more effective. That’s what we’re now trying to do.”

Dr. Sengupta and team’s latest study was published in November in Nature Biotechnology.

Observing the Transfer of Mitochondria

To study the interactions between cancer cells and immune cells, Dr. Sengupta’s team co-cultured breast cancer cells with different types of immune cells, including T cells. When they looked at the cells using FESEM, they saw that tube-like filaments were connecting the two types of cells. “The cancer cell sends out these nanotubes, which are almost like tentacles,” he says.

When researchers zoomed in further, they noticed there were small particles along the length of these filaments. Suspecting the particles were mitochondria, they labeled these organelles with a fluorescent green dye that bonds to mitochondrial proteins. They then were able to observe the mitochondria being pulled out of the T cells, traveling the length of the nanotubes and being incorporated into the cancer cells.

Further analysis of the metabolic functions of both the immune cells and the cancer cells confirmed that the shift in mitochondria from one cell to the other was affecting cell function.

Next, the researchers tested whether they could intervene and prevent the cancer cells from hijacking mitochondria. In mouse models of breast cancer, they injected a drug that blocks the formation of these filaments. When they combined this agent with immune checkpoint inhibitors, they saw a significant reduction in tumor growth in the mice.

Dr. Sengupta’s team is now working with other investigators to develop next-generation filament-inhibiting agents that are more drug-like and potentially could be developed for evaluation in clinical trials.

“The implication of this work is that if we can prevent the mitochondrial hijacking from happening, essentially preventing the T cell’s batteries from being stolen by the cancer cells, then the immune cell retains the energy to attack the cancer cell,” he explains.

Dr. Sengupta expects this approach could be successful for a number of different solid tumors. “We’ve observed this behavior in lung cancer, breast cancer, melanoma and many other tumor types,” he says. “We believe this could be part of a broad strategy for making immunotherapy more effective.”

Brigham and Women’s Hospital is committed to fueling life-saving advancements in cancer research and care. Learn about the Cancer Research Center at the BWH Brigham Research Institute.

While clinicians have several tools at their disposal to determine whether patients are delirious, researchers at the Brigham are going a step further by focusing on the severity of delirium. Geriatrician Tammy T. Hshieh, MD, MPH, discusses a more nuanced delirium rating tool featured in a recently published study.

END_OF_DOCUMENT_TOKEN_TO_BE_REPLACED

By using a newer technique called lesion network mapping, Michael Ferguson, PhD, Michael D. Fox, MD, PhD, of the Center for Brain Circuit Therapeutics at Brigham and Women’s Hospital, and colleagues have identified a specific brain circuit that seems to be a neural substrate for spirituality and religiosity.

END_OF_DOCUMENT_TOKEN_TO_BE_REPLACED

Several studies in predominantly older white populations have identified various risk factors for early COPD such as asthma. Now, Fariha Khalid, MD, MPH, Alejandro A. Diaz, MD, MPH, of Brigham and Women’s Hospital and colleagues have conducted one of the largest studies of early COPD in U.S. Hispanics/Latinos.