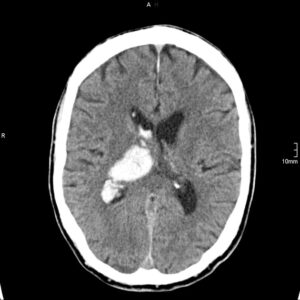 A team that includes investigators from Brigham and Women’s Hospital, Massachusetts General Hospital and Boston University School of Medicine is one of three multidisciplinary groups that recently received funding from the Henrietta B. and Frederick H. Bugher Foundation to develop breakthroughs related to hemorrhagic stroke. The over $11 million gift, which the American Heart Association is overseeing, aims to improve prevention, treatment and health outcomes for patients with intracerebral hemorrhage.

The project is an important collaboration between the Brigham and Mass General, the two largest institutions in the Mass General Brigham health care system (formerly known as Partners HealthCare). The Boston-based team of the American Heart Association-Bugher Foundation Center for Excellence in Brain Health after Hemorrhagic Stroke, led by Center Director Jonathan Rosand, will focus on fundamental questions related to brain health and health care disparities. Brain health is defined as the ability to perform all of the activities of cognition, and threats to brain health include cognitive decline, depression and dementia. This work is an important research component of the McCance Center for Brain Health, of which several of the investigators are members.

Because survivors of intracerebral hemorrhage are at increased risk for progressive deterioration of brain health — and because this deterioration is often accelerated in Blacks and Latinx patients — correcting inequities related to race and ethnicity could considerably enhance long-term patient outcomes. The initiative’s efforts are split into the areas of clinical, basic science and population-based research.

“Hemorrhagic stroke is a disease with marked disparities between white and nonwhite populations,” said Christopher David Anderson, MD, MSc, division chief of stroke and cerebrovascular diseases in the Brigham’s Department of Neurology, who is leading the population-based science effort. “The goal of our project is to improve brain health after hemorrhagic stroke, which will prevent further decline and poor outcomes for patients. We think that immediately after the patient has suffered a stroke is a good time to intervene and put them on a path toward better health.”

Building a Tool to Improve Long-Term Care in Stroke Survivors

The population-based science component of the project is focused on building a tool that will help remind physicians of the importance of ongoing care. Part of the grant will go toward building capabilities into the electronic health record that will pop up alerts and reminders that keep health care providers oriented toward longer-term issues.

“For patients who survive hemorrhagic stroke, we need to think of this time immediately afterward as a teachable moment, where physicians can intervene and provide guidance before sending them back into the community,” Dr. Anderson said. “We can remind physicians that this is a great opportunity to look at other factors that contribute to health, like cholesterol levels and diabetes control.”

He added that two of the biggest risk factors for patients who have had hemorrhagic stroke, especially older people and minorities, are social isolation caused by vision and hearing loss and obstructive sleep apnea.

“We can use this time to consult with patients on these topics and guide them toward resources,” Dr. Anderson said. “We’re using this new award to roll out these tools across all of the Mass General Brigham hospitals to hopefully improve care for everyone.”

The team plans to eventually conduct a clinical trial to evaluate whether use of the tool can lead to better patient outcomes. Another effort within Dr. Anderson’s portion of the project will involve building and testing polygenic risk scores and determining how useful they are for diverse populations.

Collaborating on Projects Related to Blood Pressure and Siderosis

A focus of the clinical portion of the project, led by Alessandro Biffi, MD, director of the Aging and Brain Health Research Group at Mass General, will be the study of social determinants of health and social networks on blood pressure control, which is a risk factor for both cognitive decline and additional intracerebral hemorrhage events.

The project’s basic science component, led by Susanne van Veluw, PhD, also of Mass General, will use human brain tissue and animal models to understand the neuropathology and mechanisms involved in cortical superficial siderosis, a more recently discovered strong risk factor for intracerebral hemorrhage. “There’s a lot of cross-talk between these three projects,” Dr. Anderson said. “The discoveries that we make in each of these areas with regard to risk factors will inform the others.”

Another aspect of Dr. Anderson’s project is being done in collaboration with investigators at Tougaloo College, a historically black institution in Jackson, Mississippi. He has previously worked with the team there on a similar project related to atrial fibrillation.

“This relationship not only gives me the opportunity to provide mentorship to someone who’s interested in medicine and to help train the next generation of investigators, but also to work with investigators who can provide a different perspective,” he concluded. “It’s a big component of the American Heart Association’s overall mission and of what this grant is supposed to accomplish.”