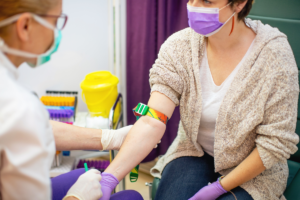 Investigators at Brigham and Women’s Hospital have a clinical trial underway to evaluate the utility and efficacy of a novel blood test that screens women for ovarian cancer risk. Led by Kevin Elias, MD, of the Department of Obstetrics and Gynecology, the trial aims to enroll 500 women who are estimated to be at increased risk of developing the disease due to a family history of cancer or a known mutation in BRCA1, BRCA2 or another gene linked to ovarian cancer.

Through this test, investigators hope to provide guidance to women on the risk of developing ovarian cancer in the subsequent three years. By enrolling women with a known hereditary predisposition to ovarian cancer and following them over several years, investigators seek to confirm patterns within specific biomarkers in the blood that indicate the presence of early asympomatic cancers in the ovaries and fallopian tubes.

“Based on the tools we have now, we’re only able to give a woman her lifetime risk of developing ovarian cancer, not her immediate risk,” Dr. Elias said. “These women are sitting on a ticking time bomb, which obviously creates a lot of stress. With this test, we hope to be able to give women guidance on when they should have prophylactic surgery and when it’s okay to defer it.”

Looking to microRNA Patterns and Changes in Blood Markers

The new early diagnostic tool used in the trial employs an algorithm that looks for certain patterns of microRNAs in the blood. A study led by Dr. Elias and published in eLife in 2017 reported the algorithm had 100 percent specificity for ovarian cancer, a positive predictive value of 91.3 percent and negative predictive value of 78.6 percent. The test looks for patterns of fewer than two dozen nucleotides that indicate cell development pathways in ovarian tissue have begun to go awry.

The trial builds on those findings. It is enrolling women who have already planned to have prophylactic surgery and will collect blood samples over the time leading up to that procedure to look for changes in blood markers. “In this phase of the study, we’re confirming that the patterns we’ve seen in individual samples hold up in a population under close observation, not using the blood test to decide who gets surgery and who doesn’t,” Dr. Elias explained.

Dr. Elias and his colleagues are taking a safety-first approach: They want to confirm the blood test won’t give women false reassurance about their immediate risk of developing cancer by missing biomarkers when cancer is actually present. Their ultimate goal is to be able to use the test to counsel women on when it’s safe to defer surgery and when they should not wait.

“Long term, we envision women will get tested every six months or once a year,” said Dr. Elias, who is also affiliated with Dana-Farber/Brigham and Women’s Cancer Center. “Because these women are mostly in their 20s and 30s, we want to help them defer surgery as long as possible.”

He added that experts in the Brigham’s Center for Infertility and Reproductive Surgery are available to counsel women on issues related to fertility before surgery, including egg and embryo freezing as well as pre-implantation genetic diagnosis.

Applying a Test to Broader Populations

Dr. Elias noted one thing that’s innovative about this trial is that it doesn’t require women to come to the Brigham’s main campus in Boston to participate. Rather, they can provide informed consent virtually and then have their blood drawn at a local hospital and sent to the Brigham for analysis. When they eventually undergo prophylactic surgery, they can have their pathology reports sent to the trial investigators. With this model, the team hopes to recruit participants whose members may live in different parts of the country.

The researchers also are using blood samples from the National Institutes of Health’s Prostate, Lung, Colorectal and Ovarian (PLCO) Cancer Screening Trial to further validate their test. That trial collected blood samples and clinical data on 30,000 women in the late 1990s and early 2000s. “We can look at blood collected from the women over the years of the trial, up until the point where they were diagnosed with cancer,” Dr. Elias said. “It’s essentially a trial in hindsight.”

If the test is confirmed to be effective in women at high risk, Dr. Elias and his colleagues ultimately envision screening all women with the blood test as part of their regular health care.