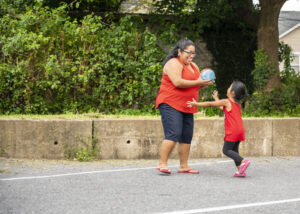 Latinx people are almost twice as likely to be diagnosed with type 2 diabetes as non-Hispanic whites, according to the American Diabetes Association. As part of its larger goal of addressing health care disparities in minority populations, Brigham and Women’s Hospital has begun efforts to advance systems of care, research and community programs that elevate the health status of communities in the Boston area, including the Latinx community.

For diabetes care, many innovative efforts are being led by Augusto Enrique Caballero-Robles, MD, who recently joined the Brigham from the Joslin Diabetes Center. A native of Mexico, he attended medical school in Mexico City before coming to the United States to train as an endocrinologist.

“After spending 20 years working at an academic center where we waited for patients to come to us, I’ve realized that the best way to help a community is to immerse yourself in it,” Dr. Caballero said. “This is exactly what I decided to do.” To that end, he is now seeing patients at the Brigham’s Southern Jamaica Plain Health Center (SJPHC), a primary and family care practice where Latinx patients make up a large share of the patient population

A Focus on Culturally Sensitive Programs

The thinking behind a large hospital system like the Brigham shifting more care toward community health care centers is to bring high-level science and medical care into environments where people live. “Many people are intimidated by large hospitals like the Brigham, and they may be more inclined to seek treatment somewhere they feel the providers better understand their language and their culture,” Dr. Caballero said. “My vision is to bring exemplary diabetes care into the Jamaica Plain community.”

Although the COVID-19 pandemic has slowed efforts, Dr. Caballero and his team have many plans in place to address the health care disparities seen in the Latinx population with regard to diabetes and its underlying risk factors. These include shared medical appointments, also known as group medical visits, in which several patients are seen together in a group setting.

“These appointments are usually very well-received by this community,” Dr. Caballero said. “It is not a traditional patient education class, but an actual medical visit in which I address each patient’s needs individually. At the same time, though, everyone is listening and learning from others’ experiences.” He added that this model can help some people be more motivated to improve their own health.

Other efforts will focus on strengthening culturally sensitive patient-education programs and even creating new fun activities like dancing programs, which bring members of the community together while also helping them become more physically active. During the pandemic, when many of these other plans are on hold due to social-distancing measures, SJPHC has greatly increased its telemedicine efforts. This is something Dr. Caballero hopes will continue after the pandemic has ended, because it’s a convenient way for many people to receive health care.

Addressing Challenges in the Latinx Community

There are many reasons for the higher rates of diabetes in the Latinx community, including genetics, poor diet, having limited physical activity and living in food deserts (areas where it may be difficult to obtain healthy, fresh foods). Dr. Caballero also noted that access to health care overall is challenging to many in the Latinx community due to lack of insurance, language barriers and other issues. This may result in people who are at high risk of type 2 diabetes being unaware of those risks or how to reduce them, he said.

Raising awareness and reducing risks are two of the issues Dr. Caballero plans to address through efforts at SJPHC and more broadly. In collaboration with the Brigham’s Diabetes Management Program and Division of Endocrinology, Diabetes and Hypertension, he and his colleagues aim to increase participation by Latinx people and other minorities in clinical trials for diabetes and related disorders. These groups have historically been underrepresented.

Dr. Caballero also plans to collaborate with primary care providers and specialists in other areas at the Brigham to identify ways to strengthen existing programs and develop new programs for the Latinx community. “We’re very focused on what we’re doing locally, but at the same time we very much want to work at the hospital level to develop more integrated efforts to help this community in the fight against diabetes,” he concluded.