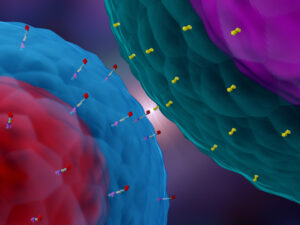 Engineered cellular treatments like chimeric antigen receptor (CAR) T-cell therapy are changing the long-term outlook for many patients with blood cancers. Physicians and scientists at Dana-Farber/Brigham and Women’s Cancer Center (DF/BWCC) are at the forefront of bringing some of these treatments into the clinic. The latest example is Tecartus™ (brexucatagene autoleucel), which was approved by the U.S. Food and Drug Administration (FDA) in July for mantle cell lymphoma.

“This is a new field, and there’s still so much room for growth, but it’s already very promising,” said DF/BWCC medical oncologist Caron A. Jacobson, MD, a member of the team that conducted ZUMA-2, the single-arm, multicenter trial that led to the approval of Tecartus. “It requires contributions from specialists in many clinical areas as well as in the lab. At DF/BWCC, we are leaders in bringing these treatments to patients.”

Like earlier CAR T therapies that have received FDA approval, Tecartus is targeted against a protein on the surface of cancer cells called CD-19. But compared to those earlier drugs, Tecartus has an extra manufacturing step: After the patient’s cells are removed, but before being activated and expanded, they go through an extra treatment to ensure the T cells are isolated from other cells in the pheresis product and all lymphoma cells are removed.

Tecartus is the first CAR T treatment to be FDA-approved specifically for mantle cell lymphoma. CAR T has previously been approved for some forms of aggressive non-Hodgkin lymphoma and for adult lymphoblastic leukemia in patients up to age 25. It’s currently being studied in trials for indolent lymphomas, multiple myeloma, acute lymphoblastic leukemia and chronic lymphocytic leukemia as well.

“Mantle cell lymphoma is a blood cancer where cell therapies can have a real impact on how long people live with the disease,” Dr. Jacobson said. Once patients have relapsed or stopped responding to other treatments, including BTK inhibitors, the disease is considered high risk and usually progresses very quickly. These patients have few options. “Donor stem cell transplants are the only treatment for mantle cell lymphoma that are considered curative,” she added. “It’s too early to know for sure, but we believe Tecartus could provide a cure for some patients.”

In the ZUMA-2 trial, the investigators reported that 67 percent of patients had a complete response to therapy. After an average follow-up of 12.3 months, 57 percent of the 60 patients who initially responded were still in remission.

Unlike stem cell transplants, which require patients to be in complete remission before they can be given, CAR T can be given to patients who still have some active disease. “We think CAR T treatments may be a better option for these patients because it’s difficult to get them into remission,” Dr. Jacobson said.

Tecartus has side effects similar to those of other CAR T therapies. They are not as long-lasting as the side effects from transplant, but they can initially be severe in a subset of patients and require close monitoring. Many patients experience cytokine release syndrome as their T cells attack the cancer. The therapy can also cause neurologic toxicity, although it usually lasts only the first few weeks after treatment.

As part of the DF/BWCC team, a number of experts in areas including neurology, nephrology, cardiology and infectious disease have also been involved in the development of these therapies from the early stages. “We have a high-volume program, with 100 to 150 patients getting these treatments annually,” Dr. Jacobson said. “There’s been a wonderful symbiosis with all these other experts, who have built up expertise in managing patients and their side effects right alongside the oncology team.”

She added that many of these experts are developing independent research in their own fields that is based around the management of patients getting CAR T therapies.

Dr. Jacobson also said that expertise in hematopathology, immunology and other lab-focused areas is leading to new discoveries that can help patients in the future. “Every blood sample and every tumor biopsy that we get from patients can tell us something new about this therapy,” she concluded. “Each sample can tell us more about what happens when CAR T therapy works, and what happens when it doesn’t, so that we can improve and expand these treatments.”