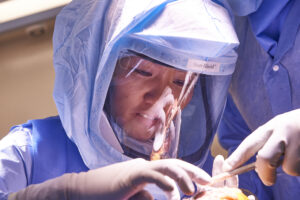 While men continue to greatly outnumber women in the field of orthopaedic surgery, especially in the subspecialty of hip and knee joint replacement, a recent study shows they do not have fewer post-surgical complications than their female colleagues.

Antonia F. Chen, MD/MBA, an investigator on the Level III prognostic retrospective case-control study, is director of research for the Division of Adult Reconstruction and Total Joint Arthroplasty in the Department of Orthopaedic Surgery at Brigham and Women’s Hospital. She said her interest in the topic was prompted by an earlier study in Canada, which found no gender-based differences in patient outcomes or complications among surgeons conducting general and other specialty surgeries.

“I wanted to dig deeper and find out if the same held true for U.S. surgeons, and particularly for orthopaedic surgeons conducting total joint arthroplasty procedures, where there are even fewer females than in general surgery,” she said. “I am one of only two female arthroplasty surgeons practicing in an academic setting in the entire Boston area, so this study has particular relevance for my practice in terms of what we can do to make patients more comfortable with female orthopaedic surgeons.”

Volume and Experience Count in Knee and Hip Arthroplasties

The study analyzed surgical outcome data from nearly 9,000 surgeons who had performed at least 20 primary knee or hip arthroplasties from 2009 to 2013. Overall, the female surgeons — only two percent of the population studied — averaged fewer arthroplasties and were earlier in their practice than their male counterparts. Their gender, however, did not have a negative impact on their surgical outcomes.

“We found that complication rates depended on the volume of surgeries conducted,” Dr. Chen said. “Surgeons who conduct more surgeries and have more experience tend to have lower rates of complications, regardless of their gender.”

Dr. Chen said she hopes the results of this study will help change public perception of the capability of female surgeons. She wants patients at the Brigham to be confident that no matter their surgeon’s gender, they will receive excellent care.

“In orthopaedics more than other fields, patients may question whether a female surgeon is physically strong enough to conduct certain surgeries,” she said. “They may assume that male surgeons have better outcomes and are more proficient clinically. This study debunks that myth.”

Dr. Chen will follow this current study with one comparing gender-based differences in academic research productivity in different subspecialties, including arthroplasty and hand surgery.

Dr. Chen stressed that she feels fortunate to be part of the Brigham, which, as an equal opportunity employer, is committed to a diverse workforce and supports its entire faculty, regardless of gender. Her department is home to other female surgeons specializing in hand, sports medicine, and foot and ankle surgery.