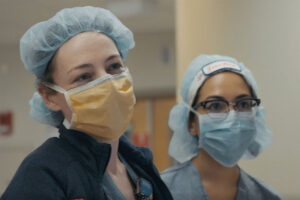 In March of 2020, Mass General Brigham (MGB) implemented a universal masking policy that required all staff in the health care system to wear a surgical mask while in the hospital. MGB is comprised of 78,000 employees across 12 Massachusetts-based hospitals, including Brigham and Women’s Hospital and Massachusetts General Hospital (MGH).

At the time, the concept of universal masking was new and its potential effectiveness unclear. But now, a new study led by Deepak L. Bhatt, MD, MPH, FACC, executive director of Interventional Cardiovascular Programs at the Brigham, makes it clear that after universal masking was implemented at MGB, the rate of COVID-19 infection among health care workers dropped significantly. The breakthrough study was published in JAMA this July and is the first to provide direct COVID-19 research data based on the testing of health care workers before and after implementation of a universal masking policy.

“When our infectious control leaders announced a universal masking policy early in the pandemic, it was a bold move, especially at a time when, like all health systems, we were facing personal protective equipment (PPE) shortages,” says Dean Hashimoto, MD, the chief medical officer for Occupational Health Services at MGB. “But the results of our study demonstrate that requiring masks for all hospital staff was critical to protecting our employees.”

The study assessed infection rates for SARS-CoV-2 among MGB health care workers before and after a universal masking policy was implemented across all 12 hospitals, including the Brigham. Using electronic medical records, Dr. Bhatt and colleagues, including the paper’s first author, Xiaowen “Wendy” Wang MD, a cardiology fellow at the Brigham, and co-first author, Enrico G. Ferro, MD, a resident physician at the Brigham, examined data from March 1 to April 30, 2020.

The study examined test results for health care workers who had symptoms of COVID-19. Throughout the study period, any hospital employee showing symptoms could be tested (at the time, there was a testing shortage for non-employees). Of 9,850 health care workers tested over the study period, 1,271 (13 percent) had positive results for SARS-CoV-2. The investigators compared infection rates during the pre-intervention period of March 1 to March 24 to the intervention period of April 11 to April 30 (a transition period was allowed from March 25 to April 10 to account for a lag in symptoms).

The Study May Support a Nationwide Universal Masking Policy

“For those who have been waiting for the data before adopting a masking practice, our paper makes it clear: Masks work,” says Dr. Bhatt. “Our hope is that this study can help reset the masking debate, especially for those who still have strong feelings against the practice.”

While the study examined the effects of wearing masks in a health care setting, Dr. Bhatt says the results of this study can be extrapolated to other settings where social distancing isn’t feasible, such as a crowded office space or even close quarters in an outdoor space.

“There’s still a lot of variability in terms of masking and many entrenched opinions about whether to wear a mask,” says Dr. Bhatt. “But if we focus on the data, I would say that now we have very strong science to support a universal masking policy nationwide.”

This July, the editor-in-chief of JAMA, Howard C. Bauchner, MD, and the director of the Centers for Disease Control and Prevention (CDC), Robert R. Redfield, MD, supported the concept of a nationwide masking policy in a live interview on the JAMA website. Dr. Redfield also endorsed such a policy in a recent editorial published in JAMA.

COVID-19 Cases Dropped Even as Cases in Massachusetts Rose

In their paper, the authors outline the limitations to their study. Due to obvious logistical and ethical considerations, it wouldn’t have been feasible to conduct a randomized trial to test whether universal masking alone accounted for the reduction in SARS-CoV-2 infections.

The authors also cite other interventions during the study period that could have confounded their results. For instance, the decrease in health care worker infections could have been confounded by interventions inside and outside of the health care system, such as restrictions on elective procedures, social distancing measures, and increased masking in public .

Despite these local and statewide measures, the numbers of COVID-19 cases continued to increase in Massachusetts during the study period. This suggests that the decrease in the SARS-CoV-2 positivity rate in MGB health care workers took place before the decrease in the public.

“Given the results of our study, I think the debate of ‘to wear a mask or not wear a mask’ is over,” says Dr. Bhatt. “Now, we should direct our time and energy toward enacting universal masking in appropriate settings where social distancing isn’t possible.”