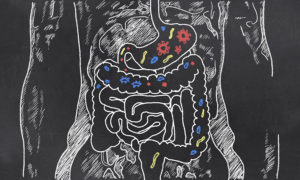 Over the past decade, Brigham and Women’s Hospital has led the way in investigating fecal microbiota transplantation (FMT). The FMT Program at the Brigham was the first to conduct clinical trials on FMT for the treatment of primary sclerosing cholangitis and, most recently, obesity.

Jessica Allegretti, MD, MPH, a Brigham gastroenterologist, investigates the role of the microbiome in various chronic diseases and how FMT can be used to treat them. Much of Dr. Allegretti’s research has focused on recurrent Clostridiodes difficile, or C. diff, a bacterial infection that can be caused by antibiotics usage.

“There’s about a 90 percent success rate at curing recurrent C. diff with a fecal mircrobiota transplant,” says Dr. Allegretti, director of the FMT Program at the Brigham.

The remarkable results seen with C. diff led Dr. Allegretti to explore the use of this therapy for other chronic diseases. While finding novel treatments is a priority, studying FMT could also shed light on the microbiome’s role in the pathogenesis of many conditions. Obesity, for example, affects millions of people, and yet little is known about its pathology.

“Ultimately, as we conduct more clinical trials and better understand the microbiome’s role in obesity, we will be able to develop more effective, more targeted therapies for patients,” says Dr. Allegretti.

How Does Microbiota Affect Satiety?

In a study published in Clinical Gastroenterology and Hepatology in July of 2019, Dr. Allegretti and her team transferred intestinal microbiota from a lean donor to obese patients. The double-blind study followed 22 metabolically-healthy obese patients who were assigned randomly to receive FMT capsules or placebo capsules.

Study participants received an induction dose of 30 capsules and two maintenance doses of 12 capsules. The microbiota were provided by a lean donor through the OpenBiome stool bank. Mixed-meal tolerance tests were performed to measure hormonal changes before and after FMT.

The study’s primary outcome was the change in the hormone, GLP-1. GLP-1 is a byproduct of fiber digestion: gut bacteria break down fiber into short-chain fatty acids, which trigger the release of GLP-1 from the bowels. GLP-1 promotes satiety.

To conduct this study, Dr. Allegretti collaborated with Christopher C. Thompson, MD, MSc, an interventional gastroenterologist and director of Endoscopy at the Brigham. Together, they decided to focus on obese patients who were metabolically healthy—meaning they didn’t have diabetes, fatty liver disease, or other complicating factors—because this population hadn’t received much attention in the search for new therapies.

Though FMT is not a new concept—it was first reviewed in the literature in the 1950s—there has been significant progress in this space in the last 10 years. When Dr. Allegretti started the FMT Program as a trainee in 2012, few patients had heard of the treatment option.

Today, she says, most patients and practicing physicians know about FMT. In fact, many patients are seeking her out, and she frequently receives referrals from providers on behalf of interested patients.

Despite the many trials and systematic reviews, FMT is not FDA-approved for any indication, including recurrent C. diff. “That’s why small pilot studies like our obesity trial are needed,” says Dr. Allegretti. “They allow us to explore this space more fully.”

Study Findings and Next Steps

While Dr. Allegretti’s study didn’t observe changes in GLP-1, the microbiome did successfully engraft in the colon of patients who received FMT, meaning that these patients exhibited similar bacteria profiles as their donor. There were also changes in levels of bile acids, another bacterial byproduct.

“Our new hypothesis is that perhaps we focused on the wrong mechanism,” says Dr. Allegretti. “There are mechanisms of interest that we would like to explore further.”

To this end, Dr. Allegretti and her team are conducting secondary analyses to look for novel pathways. These data will be presented in May at Digestive Disease Week 2020.

“I attribute the success of this research to having great collaborators and the resources here at the Brigham,” says Dr. Allegretti. “Our small pilot study is an important first step in moving this field forward.”