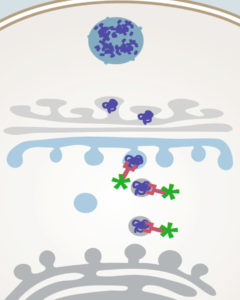 A small molecule discovered by researchers at Brigham and Women’s Hospital may hold promise for treating mucin-1 kidney disease (MKD) as well as other toxic proteinopathies of the brain, eye, lungs and liver. These diseases are driven by genetic mutations that result in misfolded, “toxic” proteins that in turn become trapped and accumulated in cells.

The study’s senior author, Anna Greka, MD, PhD, is director of Brigham and Women’s Hospital’s Kidney-NExT Center for Kidney Disease and Novel Experimental Therapeutics and the Greka Lab, where she and her colleagues conducted groundbreaking work illuminating the mucin-1 (MUC1) mechanism. They recently published their findings in Cell.

The researchers screened about 4,000 compounds before discovering one with the ability to degrade and remove the misfolded MUC1 protein. The molecule, BRD4780, works by releasing misfolded MUC1 from its entrapment in TMED9 cargo receptor-containing vesicles and re-routing it for lysosomal degradation. The compound was effective in mouse models, patient cells and patient kidney organoids, otherwise known as “mini-kidneys-in-a-dish.”

“We discovered completely new biology in terms of the role TMED cargo receptors play in how cells deal with toxic misfolded proteins,” Dr. Greka explained. “And now, BRD4780 has emerged as a promising treatment strategy for re-routing misfolded proteins to the lysosome.”

According to Dr. Greka and colleagues, the study “provides answers to several important questions about both MKD and, more generally, mechanisms for clearance of misfolded secretory proteins. It also has important implications more broadly for future therapeutic efforts against several toxic proteinopathies.”

Dr. Greka pointed to two of the study’s key findings:

The study’s authors noted that more studies will be required to evaluate the effects and possible toxicities of the compound as well as the range of additional, currently untreatable, toxic proteinopathies for which it may provide therapeutic benefit.

According to Dr. Greka, she and her Brigham colleagues will continue to work toward bringing a TMED-targeting compound to clinical trials that, if proven successful, will have a significant impact on patient care. She also noted that developing a better understanding of the new pathway will help identify additional new treatments.

“While we started this work focused on the kidney, we now have the opportunity to understand and treat many more diseases, which is one of the most exciting discoveries from this project,” she said.

Dr. Greka added that the work she and her colleagues are doing reflects the caliber of the Brigham’s nephrology research. “For the last several decades, we had not seen a lot of innovation in nephrology,” she said. “Now it’s finally happening, and the Brigham is at the center of it all.”