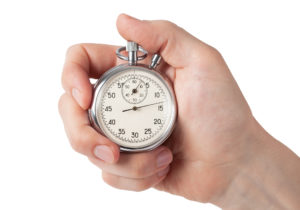 Using principles of industrial engineering and system dynamics, the stroke care team from Brigham and Women’s Hospital Department of Neurosurgery improved door-to-needle time for thrombectomy. Starting with a thorough assessment of workflow, the team replaced sequential processes with parallel ones, improved communication and transparency across the many disciplines involved, and increased awareness of how each role contributed to patient care. The result: Improved efficiency shortened the door-to-needle time that is a hallmark of quality in stroke care.

Over one year, the quarterly median time from arrival to skin puncture dropped by approximately 20% from a starting point that already was well below the 77-minute average of Thrombectomy-Capable Stroke Centers certified by the Joint Commission. For the first quarter of 2019, the median door-to-needle time at Brigham and Women’s was just 44 minutes.

It is estimated that for every 30-minute delay in time to revascularization, there is a 10% decrease in the likelihood of a good outcome from endovascular treatment.

“We took industrial engineering concepts – particularly about process optimization — and applied that to stroke care,” said Mohammed A. Aziz-Sultan, MD, chief of vascular/endovascular surgery. “Our goal was to improve workflows and reduce time to treatment, which is so important when each minute can translate into the loss of nearly two million neurons.”

Dr. Sultan began the project to apply what he was learning in a class on system dynamics at the MIT Sloan School of Management. Using principles of system dynamics, the team pinpointed bottlenecks and time gaps in acute stroke treatment and addressed them by improving process, communication and teamwork. The effort, over nearly six months, included Emergency Medicine, Neurology, Anesthesia, Neurosurgery, Radiology, Nursing and Environmental Services working together.

“It showed us how to work across multi-disciplinary groups in a thoughtful manner,” Dr. Sultan said.

“Follow the Work” Exposed Delays and Led to Changes

An initial data dive revealed that thrombectomies and other procedures in the Interventional Neuroradiology (INR) suites often had delayed starts and higher-than-expected turn over time between procedures. To determine root causes, Dr. Sultan and colleagues mapped out every step from a patient’s arrival through the procedure until exiting the INR room.

Stopwatch in hand, they followed the care teams across the full range of work involved – ED, neurology, neurosurgery, anesthesia, nursing, techs, housekeeping and others.

“Follow the work,” was the mantra of this information-gathering stage, explained Daniel Large, PA for the cerebrovascular group. All team members were asked to describe their role and how the process could be improved. At least 15 steps were measured: how long it took receive lab results, consent the patient, bring anesthesia on board, prepare the INR room, drape the patient, perform neurological exams and more.

The resulting insights led to changes in multiple areas:

Adjust sequential steps into parallel processes:  A key finding was that nearly every step in the care process was completed before the next began – when in fact many could be done in parallel, much like a race car being worked on during a pit stop. “A lot of people were standing in their box, waiting for the patient to come to them,” Dr. Sultan said. “We asked, ‘Where can we tweak this to get things going faster?’”

The obvious analogy was “treat it like a trauma,” by bringing multiple resources to bear at once. “We unified all the stakeholders. We were able to converge around workflows, instead of around specialties,” Dr. Sultan said. “But it requires a lot of fine tuning to make the process automatic.”

Create closed loop communications:  Housekeeping was one area where process mapping identified a communication gap. Typically, housekeeping was paged to the INR after the patient was transported to the PACU – but with no process for housekeeping to acknowledge the page or inform the care team of their estimated time of arrival. Response time ranged up to 45 minutes. To close the communication loop, the team began alerting housekeeping in advance as to the likely finish time of a case and instituted a two-way communication system. A separate improvement was to add the nursing supervisor and all members of the interventional team to the stroke page, which also shortened time lags in care.

Add visualization tools and a daily huddle to focus team members on a common goal:  The information-gathering phase revealed that care team members worked “within their own lane,” Dr. Sultan said. Without a central, coordinated visual cue as to where each role fit within the whole work cycle, team members tended to wait for the next cycle of work without seeing the larger picture. To address this, a board that conveyed the status of each active case was placed just outside the INR suites. A second visual solution was a color-coded progress board that noted the day’s delays, so the problem could be analyzed later and corrected. This board is used in the newly instituted daily huddle that provides a 360° view of what went well or poorly the day before and what to anticipate in the day ahead.

“It’s about the relationships and the culture that you build”

From the outset, strong existing relationships with referring physicians and hospitals made it possible to extend process improvement beyond the walls of Brigham and Women’s Hospital. These relationships fostered two-way communication about the likely time of a patient’s arrival and the endovascular team’s readiness. Some patients could bypass the ED if imaging was completed at the spoke hospital and communicated, which sped up coordination with anesthesia and neurology.

To cultivate these relationships in recent years, the team had visited referring hospitals and in return invited their physicians to speak at the Brigham. Arriving EMT teams were also invited inside to see what happens after stroke patients arrive.

Upon discharge of a stroke patient, the referring physician receives from the neurosurgery team a detailed written account of the patient’s care, including images and timing of each step. The same data points are shared internally with all clinicians involved in the case to foster internal feedback.

Both within and outside the hospital success is “about the relationships and the culture that you build,” Dr. Sultan said.

Project leaders said that colleagues throughout the stroke care team embraced the opportunity to take a thorough look at systems and processes.

“By making changes, we drove improvements so we can deliver better care to individual patients, Large said. “We’re proud of the collaboration. And with so many groups, that’s not a small undertaking.”

Encouraged by their progress, the team continues to meet biweekly to continue improvements.