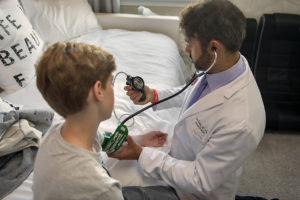 It can be challenging to assess the effects of dietary changes on a disease, especially when those changes involve eliminating common, often beloved foods from a child’s diet. However, Leonardo D. Riella, MD, PhD, FASN, associate director of kidney transplantation at Brigham and Women’s Hospital, found a way to make the elimination process both effective from a research perspective and fun for a group of young kidney disease patients.

In the late summer of 2017, Dr. Riella and colleagues created and ran a “summer camp” experience for 16 kids ages two to 21 and their families as part of The Genie Study. The unique study sought to determine the effect of a month-long gluten- and dairy-free diet on patients with steroid-resistant focal segmental glomerulosclerosis. FSGS affects about 5,000 people in the United States every year, causing painful symptoms and the eventual prospect of kidney failure.

“The medical community has been trying to treat steroid-resistant FSGS for decades, but we still don’t understand what causes the disease,” Dr. Riella said. “A few case reports and small studies showed patients have been cured by following a gluten- and dairy-free diet, and we wanted to explore the connection further.”

One of the underlying hypotheses for The Genie Study is that the release of zonulin molecules from the intestines, triggered from consuming gluten, affect the permeability of the kidney’s filtering tissue. Once that filtration mechanism is damaged, proteins can leak to the urine, causing nephrotic syndrome. Dr. Riella posited that eliminating gluten should stop the release of zonulin molecules and the resulting protein leakage, thus improving kidney function. He also wanted to confirm the findings of previous studies, which indicated that patients with idiopathic nephrotic syndrome saw a significant decrease in proteinuria when dairy milk was removed from their diets.

He realized that asking families to make their homes gluten- and dairy-free for a long enough time to observe effects would be daunting, expensive and nearly impossible to control in a typical household where cross-contamination would be probable. So, he enlisted the help of several families, and together they brainstormed ways to create a tightly controlled trial that would be practical and enticing for the participants and their families.

“One of the parents suggested creating a camp in a fun location that kids of all ages would love,” he said. “We settled on Orlando, even though it was far from Boston, because we knew there would be many opportunities for the families to enjoy themselves.”

Once the trial protocol was designed and approved, Dr. Riella spent about two months in the early part of the summer screening and enrolling participants. He and his colleagues also managed the difficult process of logistics for this first-ever, camp-based nutritional trial. They found three villas to rent — two for the patients and their families and a third for meal preparation, dining and researcher housing. They also hired nutritionists and cooks to plan and prepare all the meals that campers and their families would eat during the trial. The strict diet would be completely organic and contain no gluten, dairy, salt or processed sugar. Plus, they engaged a team of “camp counselors” to design and manage fun activities, like games, craft and cooking workshops, movie nights and outings to local theme parks.

“We had some initial challenges with the diet,” Dr. Riella said. “Parents were concerned that their children would resist the drastic change in diet with new foods and healthier preparations, and those concerns were validated when several of the kids were not eating enough. But our cooking staff did a great job making minor adjustments and finding ways to bring favorite foods into the mix in a healthy way that kids enjoyed.”

Dr. Riella and his colleagues collected blood, urine, stool and saliva samples throughout the mid-July-to-mid-August camp session, shipping them overnight to the Brigham in Boston for analysis. The study’s primary endpoint was a reduction of more than 50 percent in the urine protein to creatinine ratio. Secondary endpoints included changes in urine protein, kidney function and serum albumin, as well as effects in immune activation, kidney injury biomarkers and gut microbiome composition and function.

Researchers ran a battery of tests, including the characterization of immune cells using flow cytometry and measurement of proteins in the circulation using SOMAscan, a novel platform capable of quantifying over 1,300 proteins using an aptamer-based technology.

According to Dr. Riella, the gluten-free/dairy-free diet boosted the immune system of the participants, with an average 80 percent reduction of inflammation. Two of the patients participating in the trial were completely cured of their steroid-resistant FSGS. A promising blood marker was elevated in the patients that had the complete response. Dr. Riella hopes to follow up on this initial study with a larger, home-based trial using this potential blood marker to better identify patients who would respond well to these dietary changes.

“The Genie Study showed real promise in the role that dietary changes can play, especially when compared with the toxicity of immunosuppressive drugs typically used to treat nephrotic syndrome,” added Dr. Riella.