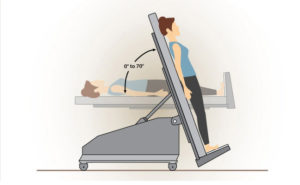 The debilitating condition is among the most common neurological conditions affecting women in the US ages 35 or younger. While knowledge of orthostatic intolerance has become more nuanced in recent years, diagnosing some patients’ symptoms when changing from lying to standing (dizziness, weakness and shortness of breath, with or without rapid heartbeat) has remained elusive.

The identification of postural orthostatic tachycardia syndrome (POTS) in the early 1990s led to clearer diagnosis of many patients. But the syndrome, by definition, excludes those who do not experience tachycardia. To address their symptoms, these patients sometimes are prescribed antianxiety or antidepressant medications.

To better understand these patients, Novak turned to continuous monitoring of end tidal CO2 and CBFv (cerebral blood flow velocity). As the technologies became available for clinical use, Novak added them to routine testing. The results led him to identify two new syndromes relating to orthostatic dizziness.

“We can now diagnose people who were previously thought to have psychiatric illness or had no diagnosis at all,” said Novak, of Brigham and Women’s Hospital Department of Neurology, one of only a few departments in the US  that has a Division of Autonomic Neurology.

In addition to continuous monitoring of heart rate and blood pressure that is standard for Valsalva maneuver and tilt-table tests, Novak’s  Autonomic Testing Lab, located at Brigham and Women’s Faulkner Hospital also measures and interprets end tidal CO2 and CBFv during these tests. Through testing, he has characterized two new syndromes:

Both OCHOS and HYCH are described among the 100 case studies in Novak’s recently published book Autonomic Testing, (Oxford University Press, April 2019), intended as a practical manual for performing and interpreting autonomic testing. Each case study includes the testing evaluation, results (with visual images to guide test interpretations) and recommendations for treatment and follow-up. Nearly all cases show results of the newer techniques of continuous CBFv and CO2 monitoring concurrent with traditional heart rate and blood pressure testing. “Together, they are more valuable than separately,” Novak explained.

The combination of classic autonomic tests (Valsalva maneuver, deep breathing and tilt test) enhanced by using of continuous CBFv and CO2 monitoring together make up “the Brigham Protocol.” In addition, the protocol includes non-invasive skin biopsies, now routinely performed in the lab to assess direct small fiber damage, which may indicate inflammation that is treatable. “We call it autonomic testing, but it is more than that at our institution,” said Novak.

Since 2015, the lab has performed autonomic testing on approximately 1,300 people, about half of them for orthostatic symptoms, said Novak.