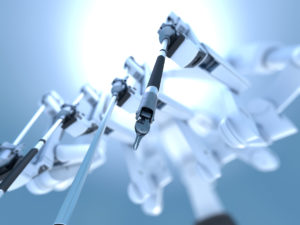 In 2017, nearly 700,000 robotic-assisted procedures were performed in the United States. Robotic surgery is fast becoming the preferred method for procedures in gynecological, thoracic, urologic, colon and rectal surgery. Today, a wide range of colorectal problems can be treated with robotic surgery.

For the past three years, Joel Edward Goldberg, MD, MPH, FACS, a colorectal surgeon in the Division of General and Gastrointestinal Surgery at the Brigham has been using an advanced robotic surgical system to treat many colorectal diseases that require surgery, including rectal and colon cancer, ulcerative colitis, Crohn’s disease, diverticulitis, and rectal prolapse, among others.

With more than 300 robotic-assisted surgeries to date, the Brigham has become a leader in New England in volume of robotic-assisted colorectal surgery. In 2019 alone, Dr. Goldberg aims to perform 150 cases.

“At this point, I use an advanced robotic system in about two-thirds of my abdominal operations for diagnoses such as rectal cancer, colon cancer and inflammatory bowel disease, with comparable results to laparoscopy and open surgery,” said Dr. Goldberg.

“As with any surgical procedure, you get better with the more you do. I’m starting to push the boundaries of this technology. I now use the robotic system to remove inflammatory masses in patients with Crohn’s. I also do total colectomies in patients with ulcerative colitis as well as Lynch Syndrome and familial polyposis,” said Dr. Goldberg.

He recently used the robotic system to operate on a rectovaginal fistula, and the patient went home in two days. He plans to use the technology to remove large polyps that can’t be removed with colonoscopy and intends to perform a transanal excision of rectal tumors and polyps, which are higher up in the rectum, allowing patients to avoid a major resection.

“In our experience, the complication rate with the robotic system is the same or lower when compared to traditional surgeries. Major complications, such as anastomotic leak and bleeding, are also as low or lower compared to open surgery,” said Dr. Goldberg.

Since a surgeon guides the movement of the four robotic arms with small wrist and foot movements, the procedure also has a lower impact on the surgeon. “The technology extends the life of the surgeon,” explained Dr. Goldberg. “I don’t get tired as fast or get a stiff neck. I’m not as prone to orthopedic injuries, such as carpal tunnel syndrome.”

The Brigham intends to stay on the cutting-edge of robotic-assisted surgery. Dr. Goldberg thinks that next-generation robotic technology may incorporate artificial intelligence that combines radiologic imaging and input from the surgeon to identify critical structures that may be at risk of injury during surgery.

Haptic technology may also be on the horizon that will recreate the sense of touch a surgeon has during open surgery. This will allow surgeons to know how much pressure they are putting on the bowel, or other critical structures, as they are operating.

“We’re only seeing the tip of the iceberg with robotic-assisted surgery. In the future, a surgeon may even be able to perform remote surgery with a bedside assistant (general surgeon), so patients don’t have to travel hundreds of miles to get specialized surgical care,” said Dr. Goldberg.