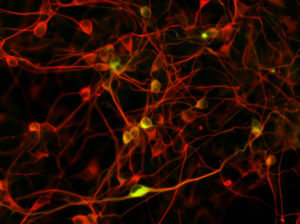 Vikram (Vik) Khurana, MD, PhD, chief of the Division of Movement Disorders in the Department of Neurology at Brigham and Women’s Hospital, with colleagues and collaborators around the world, is building a research engine poised to deliver therapies that precisely target specific disease mechanisms in individual patients with Parkinson’s disease and related disorders.

“We, and many others, think that the classification of neurodegenerative diseases is oversimplified — we have to think of each patient as an individual with potentially unique disease biology. A one-size-fits-all strategy for treatment may not work,” said Khurana, who is affiliated with the Ann Romney Center for Neurologic Diseases at Brigham and Women’s. “The focus of our research program is to understand these individual differences and tailor therapies precisely to them.”

Khurana’s scientific focus is on misfolding (or “clumping”) of alpha-synuclein protein in brain cells. Despite their heterogeneity, all patients with Parkinson’s and related diseases are defined by this process in the brain. The Khurana lab systematically “maps” the consequences of this misfolding at a molecular level in cells by using a variety of unbiased molecular methods. This mapping provides a context in which to understand how a disease might play out in an individual patient’s cells. But to make that connection, Khurana’s lab needs to capture genetic information from patients and also capture patient brain cells “in the dish.”

Unimaginable just a few years ago, advanced stem-cell technologies now enable the Khurana lab to do just that: they grow not only brain cells, but even mini-brain “organoids” from individual patients to examine how the disease unfolds. The hope is that these models will help pinpoint specific bad-actor genes that drive the disease in the patient and identify therapeutic agents that may arrest disease progression.

Khurana and colleagues first tested this gene and therapeutic discovery platform in a simple cellular model in Baker’s yeast cells that is amenable to ultra-high-throughput genetic and drug screening; they then validated the findings in human stem cells. This work, published in Science in 2013, was among the first to show how patient stem cells could be used for drug discovery in neurodegenerative diseases.

More recently, Khurana’s lab has extended the work by identifying ~300 genes that impact alpha-synuclein toxicity and another ~250 genes that encode proteins in the immediate vicinity of alpha-synuclein in neurons. Those papers, published in Cell Systems, use novel computational methods that Khurana and collaborators have developed to map systematically the molecular consequences of alpha-synuclein in living cells, thereby providing a roadmap for creating a personalized treatment discovery platform for Parkinson’s disease.

While targeted treatments for α-synuclein disease are many steps away, Khurana’s work is capturing attention and funding to help advance the research:  The New York Stem Cell Foundation named Khurana a 2018 Robertson Investigator, an early-career award that provides a $1.5 million grant. He won the 2018 Director’s Transformative Award from the Brigham Research Institute, which includes $500,000 for his research program. And, a recent private donation of $2.7 million launched an initiative for Parkinsonian disorders benefitting the Khurana lab.

Khurana’s collaborations reach around the world. With Biocruces Health Research Institute in Bilbao, Spain, he is applying his methodology to study a rare family in which some members who carry a specific alpha-synuclein mutation escape Parkinson’s Disease for unknown reasons. He also is a co-principal investigator for a $30 million initiative of the Australian Parkinson’s Mission, through which Khurana will apply his methods to better understand outcomes of multiple clinical trials for Parkinson’s disease, with a view toward designing “smarter” clinical trials.

Within Brigham and Women’s Hospital, collaborators include Tim Bartels, PhD, and Ulf Dettmer, PhD, of the Department of Neurology; Mel Feany, MD, PhD, of Pathology; and Shamil Sunyaev, PhD, and Stephen J. Elledge, PhD, of Genetics.

The work of Khurana’s lab is intertwined with the deep research and clinical experience in Parkinson’s Disease in the Brigham and Women’s Department of Neurology. A recent study that pointed to the role of fatty acids in α-synuclein neurotoxicity was led by Dennis J Selkoe, MD co-director of the Ann Romney Center for Neurologic Diseases, and a 2017 study identifying a regulator of the α-synuclein gene was led by Clemens Scherzer, MD, director of the Precision Neurology Program. These findings intersect with Khurana’s own work. The platform he co-developed has led to the discovery of drug-like molecules that can ameliorate the fatty acid enzyme identified in the Selkoe study. The Scherzer study validated its findings in stem-cell models established in the Khurana lab, and a key asthma drug identified as a potential therapeutic in that study will be tested in a clinical trial supported by the Australian Parkinson’s mission.

Khurana points out that his bench-to-bedside ambitions could be possible only in an environment like that of the Hale Building of Transformative Medicine at Brigham and Women’s Hospital, where research labs and the clinical outpatient center are under one roof.  The hospital’s other resources and partnerships enable researchers to move forward on multiple fronts to address neurodegenerative disease, including:

While Khurana’s research uses neurodegenerative diseases as the archetype of protein-folding disease, it has implications for other diseases in which protein misfolding plays a major role, he noted, including diabetes mellitus type 2, amyloidosis of muscle and peripheral nerves, and certain types of cancer.