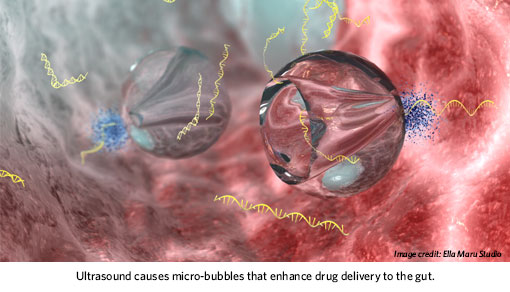 While biologic drugs hold enormous promise for treating a wide range of gastrointestinal disorders, delivering these large molecules into the GI tract is formidable. To address this challenge, Brigham and Women’s Hospital (BWH) researcher C. Giovanni Traverso, MB, BChir, PhD, and colleagues have developed an ultrasound method for delivering drugs and macromolecules into the gut.

The work began when BWH researcher Dr. Traverso, of the Division of Gastroenterology, Hepatology and Endoscopy, met patients who encountered difficulty self-administering and retaining enemas to treat inflammatory bowel disease. He collaborated with scientists at Massachusetts Institute of Technology to evaluate the potential for enhancing drug delivery through the application of low-frequency ultrasound. When used in the frequency range of 20-100kHz, ultrasound can induce pressure waves that cause micro-bubbles in the solution to oscillate. These can collapse when next to tissue, resulting in formation of micro-jets that enhance drug delivery.

In 2015, the researchers reported on the ability of this process for rectal delivery of small-molecule drugs in mice and pigs while maintaining integrity of the colonic mucosa. This initial study also suggested the potential to deliver macromolecules, including insulin, and even larger molecules approaching the size of antibodies.

Using their ultrasound method, the researchers next applied the technology to a family of molecules susceptible to rapid degradation in the gastrointestinal tract, small interfering RNAs (siRNAs). In mouse models of colitis, siRNAs directed against the TNF-alpha gene, which helps promote inflammation, significantly reduced TNF-alpha protein levels in the colon and alleviated inflammation. This proof of principle, described in Gastroenterology in 2017, suggested the potential of this ultrasound-based approach as a drug delivery method in humans. A subsequent report published in October in the Journal of Controlled Release demonstrated the potential for larger particles to be delivered and retained locally in the tissue.

“Our approach eliminates the need for engineering new molecules or creating special formulations that can withstand the harsh conditions of the gastrointestinal tract,” says Dr. Traverso. “This could help accelerate biomedical research and early-stage target discovery.”

Dr. Traverso and colleagues, are now exploring ways to extend this research and translate it for clinical use.