When the kidneys – vital organs for filtering the body’s entire blood supply – become injured, it can set in motion an unfortunate chain of events that leads to a decline in health. Sometimes, in response to chronic injury, the body begins an aberrant repair process known as fibrosis, in which normal fibroblast cells transform into myofibroblasts, proliferate out of control, migrate and form scar tissue. Once scar tissue begins to form, functional cells begin to die, and the scar tissue multiplies. Investigators have been looking for a way to break this cycle, and new findings indicate that a gene known as SMOC2 may point the way to a new intervention that could prevent this cascade of events.

Previous studies by investigators at Brigham and Women’s Hospital (BWH) had identified SMOC2 as a protein that was highly upregulated in the kidneys of mice with fibrosis. In a new study published in JCI Insight, investigators report that increasing SMOC2 in the kidney helped initiate and continue the progression of kidney fibrosis, while tamping down SMOC2 prevented it. To test this, researchers overexpressed SMOC2 in a mouse model of kidney fibrosis and performed RNA sequencing to investigate the mechanisms responsible for fibrotic development. They found that SMOC2 activated a fibroblast-to-myofibroblast transition (FMT). The team then used two approaches to “silence” SMOC2 – a genetic approach, by using SMOC2 knockout mice, and a pharmacologic approach, by administering SMOC2 siRNA. Using these approaches, researchers were successful in tamping down the protein’s production, which  protected against fibrosis development. 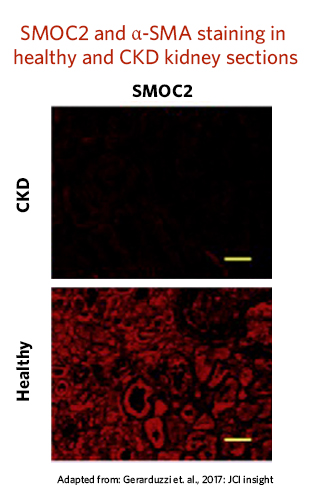 Corresponding author Vishal Vaidya, PhD, of BWH’s Renal Division, notes that one of the exciting things about SMOC2 is that it can be detected in a patient’s urine. Now that a functional connection between the protein and kidney fibrosis is becoming clearer, SMOC2 is looking like an increasingly useful biomarker for detecting fibrosis. In addition, SMOC2 may be a promising therapeutic target for an unmet medical need.

“We want to be able to intervene before the tissue becomes severely fibrotic to the point of no return. Our investigation indicates that SMOC2 could be a key to protecting against kidney fibrosis initiation and progression,” said Dr. Vaidya.

This work was made possible through funding by the Partners Innovation Discovery Grant, Outstanding New Environmental Scientist award from the National Institute of Environmental Health Sciences, Innovation in Regulatory Science Award from Burroughs Wellcome Fund, the Harvard Catalyst, and the Harvard Medical School’s Laboratory of Systems Pharmacology.