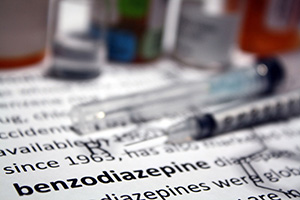 Benzodiazepines are effective in treating anxiety, insomnia, panic, seizures and muscle stiffness. While they are not commonly prescribed preoperatively by orthopaedic surgeons, they may be part of an orthopaedic patient’s medication regimen, and clinicians should consider their adverse effects.

“Opioids have received the lion’s share of attention in terms of their adverse effects, and with good reason, given the nation’s opioid epidemic,” Dr. Hernandez said. “This was an opportunity to consider the underreported impact of preoperative benzodiazepine use on the surgical outcomes of patients, and the study’s results give us an expanded picture for preoperative risk factor modification.”

Dr. Hernandez’s study analyzed information from 1.35 million adult TKA patients who filled a benzodiazepine prescription within six months of surgery. The study evaluated the association between benzodiazepine use and 90-day and two-year postoperative outcomes including revision, resection, femur fracture fixation, manipulation under anesthesia (MUA) and delirium.

“These complications can have a tremendous impact on a patient’s overall outcome and perceived satisfaction with their joint replacement,” Dr. Hernandez said. “They may also lead to an increase in health care expenditures.”

After controlling for multiple variables such as age, gender and obesity, benzodiazepine use was associated with significantly increased rates of revision, resection and femur fracture fixation among the 90-day cohort compared with patients who did not use the drug preoperatively. However, it was also associated with a decreased rate of MUA for knee stiffness, a favorable outcome.

Among the two-year cohort, patients with two or more preoperatively-filled benzodiazepine prescriptions had significantly higher rates of revision, femur fracture fixation and diagnosis of delirium than patients who did not use the drug preoperatively. Rates of MUA were still significantly lower.

Clinical Implications of Pre-TKA Benzodiazepine Use

According to Dr. Hernandez, orthopaedic surgeons can use the study’s findings to help them counsel patients taking benzodiazepines about the associated adverse events. Health care providers can also use the study’s insights to help guide future studies to determine whether other muscle relaxants with fewer adverse effects should be considered.

“This information allows surgeons to identify patients at increased risk for adverse events following TKA, prompting a dialogue between the provider and the patients about these medications and whether they can successfully wean themselves off prior to TKA,” he said. “Moreover, this information encourages providers to pause before prescribing benzodiazepines, evaluate for drug interactions and provide the lowest dose for the shortest duration, while also offering counseling and support where possible in an effort to optimize patients before potential surgery.”