Three members from the Department of Neurosurgery at Brigham and Women’s Hospital were among the featured presenters at the 2021 World Medical Innovation Forum. Their “First Look” talks showcased promising new gene and cell therapies targeting glioblastoma and other tumors with unmet need.

Khalid Shah, MS, PhD, vice chair of neurosurgery research at the Brigham and one of the presenters, highlighted the urgency of developing therapies for CNS disorders such as glioblastoma.

“In the last 30 years, we haven’t really moved the needle for tumors in the brain,” Dr. Shah said. “The standard of care hasn’t improved, so something has to change. These gene and cell therapies under development hold that potential.”

All three of the highlighted Brigham programs are in the advanced preclinical stages. Here’s a brief look at each. 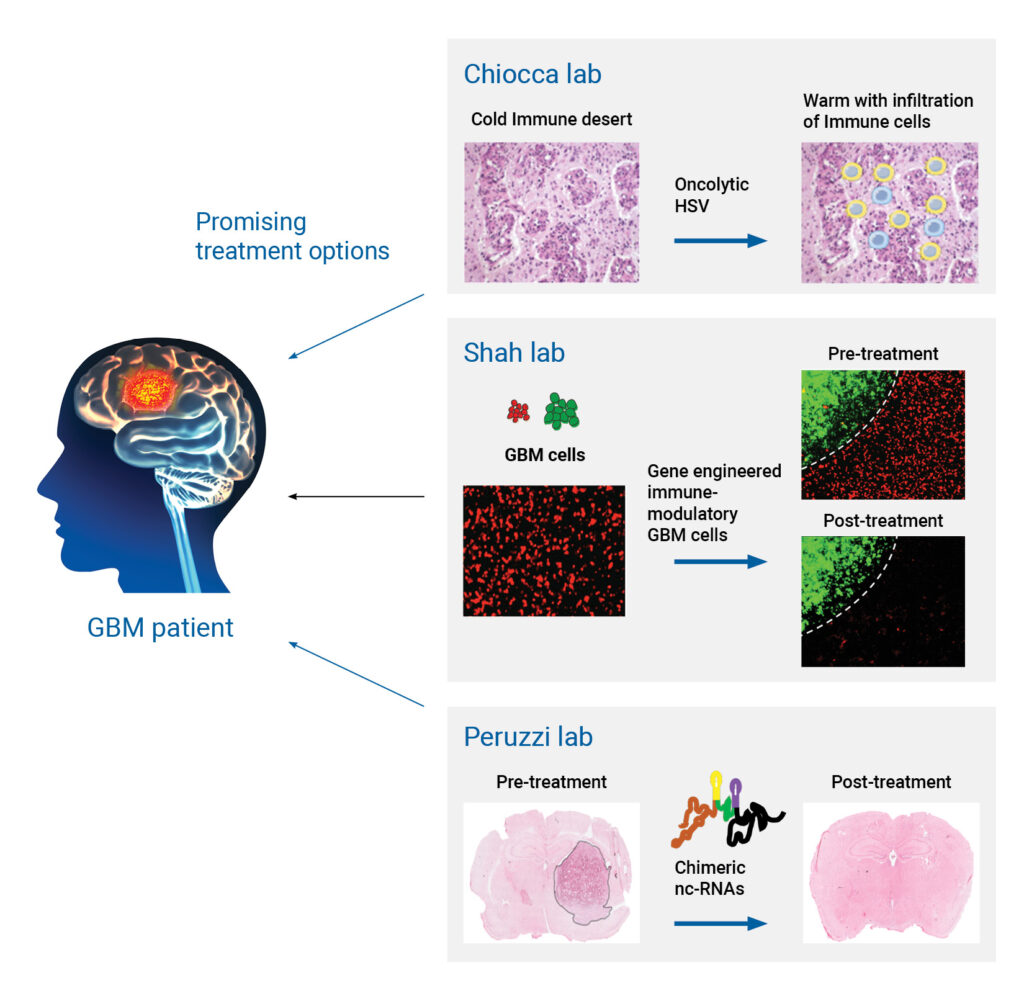 Repurposed Tumor Cells as Killers and Immunomodulators for Cancer Therapy

Dr. Shah directs the Brigham’s Center for Stem Cell and Translational Immunotherapy, which focuses on developing cell-based therapies for primary and metastatic tumors. He has led pioneering efforts in cell therapy and understanding basic cancer biology.

According to Dr. Shah, cell-based therapies have shown limitations in terms of survival time and their ability to track tumor cells. His therapy attempts to circumvent these shortcomings.

Dr. Chiocca, the chair of the Department of Neurosurgery, is a pioneer in biologic treatments of CNS disorders. His latest efforts involve treating solid tumors with oncolytic viruses, which have been genetically engineered to infect and spread in tumoral cells while sparing normal tumors.

As Dr. Chiocca explained, targeted therapies and immunotherapies have been unsuccessful in treating many of the most lethal cancers. These therapies are unable to overcome the intratumoral heterogeneity intrinsic to solid tumors such as glioblastoma and pancreatic cancer.

Over the years, Dr. Chiocca’s lab has generated several oncolytic viruses based on herpes simplex virus (HSV), type 1. Their latest invention is a first-generation oncolytic HSV that has been engineered to address safety and toxicity issues while providing even more viral replication.

Dr. Chiocca has completed a phase 1 trial with the oncolytic HSV to treat glioblastoma and is now working on IND-enabling studies for a second-generation therapeutic. “There are approximately 20,000 glioblastomas and 40,000 pancreatic cancers in the United States per year that this therapy could be applicable to,” he said.

Dr. Peruzzi is a molecular biologist and brain tumor surgeon who regularly treats patients with glioblastoma. As he noted, glioblastoma almost always recurs within a few months after administration of maximal therapy. As a result, each year more than 15,000 patients in the United States die from the disease within 15 months of diagnosis.

Dr. Peruzzi and others have found that glioblastoma’s resistance to therapies is mediated by a group of proteins that work on the DNA of the cancer cells and activate genetic programs, which promotes tumor survival and recurrence. Targeting this response has proven difficult because the “switch” is made up of multiple proteins rather than just one. Furthermore, the proteins have a high degree of redundancy.

“If you target one, the others become upregulated and minimize the therapeutic impact,” Dr. Peruzzi said. “You’re basically recapitulating a molecular whack-a-mole game. Because of this, there are really no good drug options to target this response as a whole.”

Dr. Peruzzi has thus been exploring strategies to overcome this response. His research employs microRNA in a novel method to co-opt the molecular machinery of glioblastoma cells in a way that makes them more vulnerable to chemotherapy.

“We have chosen to target this survival switch in brain cancer, because for people like me who work with neuro-oncology patients, this is probably the ultimate frontier to achieve significant therapeutic impact,” he said. “However, this technology is virtually applicable to any other cancers or diseases characterized by more than one actionable target — for example, neurodegenerative or inflammatory diseases.”

The technology should reach the clinic in two to three years, Dr. Peruzzi added.

Dr. Shah said that the three Department of Neurosurgery programs are so exciting because unlike therapies to date, all of these therapies cross the blood-brain barrier to reach the tumor directly. In other words, the work has practical implications.

“I think we may have oversold the word ‘innovation,'” he concluded. “If you can’t translate what you innovate, then you’re not getting anywhere. While we’re innovating, we’re also thinking about how we’ll actually translate therapies into patient care. That part is so critical.”