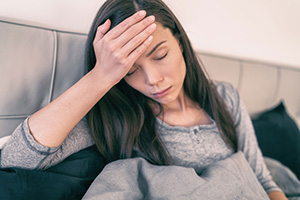 Fainting is a fairly common reaction to painful or emotional stimuli. It is especially common in young children, but most people eventually grow out of it or are able to manage the occasional occurrence. For a small group of people, however, neurocardiogenic syncope becomes debilitating, with fainting spells happening every couple of weeks, often without any provoking factors.

A recent patient of Brigham and Women’s Hospital fell into that latter group. The 20-year-old started having progressively worse fainting episodes in high school and developed post-concussion syndrome after hitting their head during a fainting spell in college. The patient turned for help to Sunil Kapur, MD, a cardiac electrophysiologist in the Brigham’s Division of Cardiovascular Medicine, who treated them with cardiac neuroablation. This novel procedure has been performed only a handful of times in the United States and Europe.

The patient’s fainting spells were triggered by even minimal amounts of stress, dehydration, lack of sleep, headaches or loud noises. Just before fainting, they would experience sudden-onset symptoms including tunnel vision, exhaustion, severe perspiration and a ringing or pounding in their ears.

“In a young, otherwise healthy patient, diagnosing neurocardiogenic syncope can be a diagnosis of exclusion,” Dr. Kapur said. “They had no underlying heart conditions or nervous system conditions, so we looked at ‘misfires’ in the communication connections between the two.”

A Family History of Neurocardiogenic Syncope

Dr. Kapur discovered that one of the patient’s parents also has neurocardiogenic syncope and had received a pacemaker to treat the condition. With that information in hand, he implanted a small heart monitor under the patient’s skin so he could observe the heart’s activity. A few weeks later, the patient experienced another fainting episode. At the time of the fainting, it appeared that the brain instructed their heart to stop completely — a form of neurocardiogenic syncope called cardioinhibitory in which the heartbeat slows or stops for long periods of time.

According to Dr. Kapur, treatment options for cardioinhibitory neurocardiogenic syncope are limited. Available medications do not provide consistently good results and can be burdensome for a younger patient to take for the rest of their life. A permanent pacemaker — as the patient’s parent had had implanted to treat the condition — would also be burdensome for a younger patient, both physically and emotionally.

“We discussed the option of not doing anything and having the patient live with the condition, which is troubling but not fatal,” Dr. Kapur said. “Instead, we wanted to try something different and knew the patient would be a good candidate for the novel cardiac neuroablation procedure, which potentially could fix the problem without affecting their quality of life.”

During the four-hour, minimally invasive procedure, Dr. Kapur worked with colleagues in anesthesiology and cardiology, inserting a catheter in the patient’s leg and using the blood vessels as a highway to the heart. There, he electrically mapped the nerves in the heart to determine which were defective, then remodeled four of them by cauterizing them to fix the communication misfires.

The patient quickly resumed normal daily activities after a day’s recovery in the hospital and hasn’t had a fainting spell since. They are making tremendous progress in physical therapy for post-concussion syndrome and can now walk on the treadmill, drive, read and listen to music and podcasts without having a blinding migraine. The heart monitor Dr. Kapur implanted earlier will stay in place so he can continue to follow the patient’s progress.

“Our patient handled the procedure very well,” Dr. Kapur said. “Our team approach helped them stay upbeat throughout, which is important when you have a younger patient who is in the medical system for the first time. This case was a perfect example of how the Brigham comes together to pursue the best care for an individual patient while advancing care that will benefit patients worldwide.”