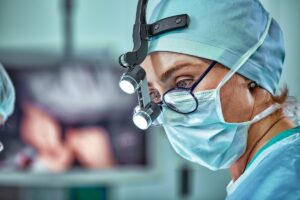 The disparity in pay between gynecologic surgery and other surgical specialties has been well-established. In a recent commentary, faculty from Brigham and Women’s Hospital and Northwestern University describe the history of this issue and other influences that drive what they call “double discrimination” — lower pay in an area of surgery that has the largest proportion of female surgeons and one that serves primarily female patients.

The authors call for changes that would create equity in reimbursement rates for gynecologic surgery, raising them to the level of other similar surgical specialties. The commentary was published in April 2021 in Obstetrics & Gynecology (download paper here).

“From an anatomical standpoint, we shouldn’t reimburse at lower rates for women’s surgery than for men’s surgery,” said senior author Louise Perkins King, MD, JD, a surgeon in the Brigham’s Division of Minimally Invasive Gynecologic Surgery and a member of the Center for Bioethics at Harvard Medical School. Some of the reasons why this is the case are noted in the commentary.

The Basis for Differences in Reimbursement

“The fact that gynecologic surgery doesn’t pay as much as other specialties means that most obstetrician-gynecologists primarily practice obstetrics, which also pays lower than many other subspecialties, but pays a little bit better [than gynecologic surgery],” Dr. King said. “For that reason, many gynecologic surgeons, especially those in private practice, operate infrequently. This, in turn, can lead to higher complication rates, as referenced in literature included in the commentary, because the surgeons don’t have as much experience.”

Creating Equity in Billing and Reimbursement

The paper calls for new legislation that would create equity in billing and reimbursement from Medicare and Medicaid, which Dr. King said would have the trickle-down effect of also increasing reimbursement levels from private insurance companies. She explained that this would allow more gynecologists to focus exclusively on surgery, raising their level of expertise and ultimately leading to better patient outcomes.

Dr. King added that, in an unusual move, the journal published all of the reviewer comments and allowed the authors to respond directly to them.

“I appreciate the journal’s efforts to make the discussions around this topic open and transparent,” Dr. King concluded. “I encourage anyone who is interested to review the many points that we have put forward about why this issue is so important.”