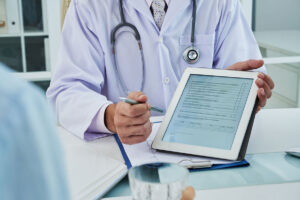 Laryngopharyngeal reflux disease (LPR), an inflammatory condition related to the direct and indirect effects of gastroduodenal content reflux, affects up to 30 percent of otolaryngology patients worldwide. The condition leads to symptoms including chronic throat clearing and cough, excess throat mucus, postnasal drip and vocal changes, which can significantly impact the patient’s quality of life.

“Besides a small but real risk of esophageal cancer, we don’t see a high rate of morbidity and mortality associated with LPR,” said Thomas L. Carroll, MD, director of the Brigham and Women’s Hospital Voice Program. “However, its symptoms can cause a great deal of stress and significantly impact quality of life for patients in both professional and social settings. Patients often experience a disconcerting globus sensation and even pain or discomfort, which makes swallowing during and between mealtimes distressing and effortful.”

According to Dr. Carroll, diagnosing LPR can be difficult because its symptoms also are encountered in other otolaryngologic conditions such as voice disorders and allergies. That is why he, along with a team of international collaborators, developed a new tool to make diagnosing LPR more reliable and easier for the clinician faced with a potential LPR patient. The Reflux Symptom Score-12 (RSS-12) was detailed in an original research paper published last year in the Journal of Otolaryngology – Head and Neck Surgery.

Easing Burdens on Patients With LPR

RSS-12 is a shorter version of a previous 22-question, self-administered, patient-reported outcome measure (PROM) questionnaire created by Jerome R. Lechien, MD, PhD, of Foch Hospital at the University of Paris-Saclay.

“The original RSS developed by Dr. Lechien improved on previous PROM tools like the Reflux Symptom Index [RSI],” Dr. Carroll said. “However, at 22 questions in length, it was felt to be too burdensome and time-consuming for patients to complete in the clinic. In addition, questions around some of LPR’s more esoteric symptoms, such as ear pain and tongue burning, don’t elicit a high number of responses.”

In developing RSS-12, Dr. Carroll and his colleagues streamlined the original RSS by eliminating several questions and combining others. He said the changes make the questionnaire more relevant to a greater percentage of patients and gives physicians more robust results — at 85 percent or more specificity and nearly 95 percent sensitivity — with which to make a more likely LPR diagnosis and create a treatment plan. This data was based on patients who had been diagnosed with LPR using objective impedance-pH testing that diagnosed LPR when gastric liquid entered the hypopharynx.

“Reflux can be overdiagnosed, especially in primary care clinics and even in specialty practices such as pulmonology, gastroenterology and otolaryngology,” Dr. Carroll said. “As a result, patients may be put on medications like proton pump inhibitors, which carry some known, untoward side effects. With RSS-12, we will more accurately identify the patients who would benefit from these medications or other reflux treatments while avoiding prescribing them to patients who would better benefit from treatments or referrals directed at diagnoses other than LPR.”

The Brigham started using RSS-12 in December 2020, incorporating it into its electronic patient intake system. Patient-reported reflux symptoms are automatically entered into both RSS-12 and RSI tools, allowing Dr. Carroll and his colleagues to compare the two scores. Future plans include using RSS-12 in the Brigham’s Division of Gastroenterology, Hepatology and Endoscopy for patients receiving 24-hour pH impedance testing.

“One of my goals is to require patients to answer as few questions as possible to obtain validated PROMs,” Dr. Carroll said. “To that end, I’m working with my colleague Jennifer J. Shin, MD, SM, another otolaryngologist here at the Brigham, to see if we can cut down the length of the questionnaire even further, ideally to about three to five questions, and create a simple dashboard screen that will give us the most meaningful information we need to confidently make a diagnosis after examining the patient.”

Because the original RSS-12 was created in French and tested in a French patient population, Dr. Carroll is currently validating an English-language RSS-12 with U.S.-based patients.

“The development and ongoing refinement of this new diagnostic tool has been a true international effort led by an unparalleled group of people, and it places the Brigham at the forefront of LPR research,” he concluded.