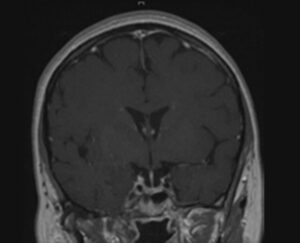 Cushing’s disease, caused by a pituitary adenoma, is the most common type of endogenous excessive cortisol production and results in Cushing’s syndrome. This is a particularly challenging disease to diagnose and treat. Surgery to remove the pituitary tumors that drive the disease can bring it under control, but these tumors can’t always be completely removed. In addition, they frequently recur, even a decade or more after surgery.

Brigham and Women’s Hospital has a long history of expertise in Cushing’s, going back to neurosurgeon Harvey Cushing, who founded the Department of Neurosurgery in 1913 and after whom the disease and syndrome are named. Now a unique collaboration between the Brigham’s Division of Endocrinology, Diabetes and Hypertension and its Department of Neurosurgery is taking a deeper look at why these tumors are so often unmanageable.

Part of this research is focused on studying the genetic underpinnings of these tumors. One of the goals is to develop drugs for treating the disease. Investigators are also looking for better ways to diagnosis it and to prevent recurrence or detect it at an earlier stage.

“Cushing’s disease is one of the most difficult things that we as neurosurgeons face,” said Edward R. Laws, MD, director of the Brigham’s Pituitary and Neuroendocrine Center.

“Every day that a patient lives with excess cortisol, it is doing damage to their bodies and their lives. If we can’t succeed in bringing those cortisol levels down, we’re not doing our jobs.”

The first challenge of Cushing’s disease is getting a correct diagnosis. “In addition to treating patients with Cushing’s disease, we also work with patients who have an excess of cortisol that’s not due to pituitary disorders,” said physician-scientist Ana Paula Abreu Metzger, MD, PhD, co-director of the Endocrine Genetics Clinic at the Division of Endocrinology, Diabetes and Hypertension. “We first have to find out what’s causing overproduction of cortisol, because the tumors secreting ACTH that cause Cushing’s disease can be very small and hard to detect.”

In the laboratory, Dr. Abreu Metzger is also studying a more aggressive type of tumor in the pituitary gland that does not secrete ACTH, called silent ACTH pituitary adenomas. “They come from the same lineage as the tumors causing Cushing’s disease but become clinically distinct,” she said. “We want to understand the genetic drivers of these tumors to develop a more personalized approach to treating them.”

Her expectation is that by learning more about the signaling pathways that drive these tumors, drugs can be developed to treat them, similar to the way targeted therapies for cancer increasingly are being employed. She’s performing whole-exome sequencing on both somatic and germline DNA to identify driver mutations as well as RNA sequencing to determine the effects that the genetic changes that are observed have on gene expression.

Dr. Laws is also working with endocrinologist Le Min, MD, PhD, associate director of neuroendocrinology in the Division of Endocrinology, Diabetes and Hypertension, to study postoperative cortisol levels as a biomarker for predicting remission versus recurrence after surgery. Their research on this topic was recently published in The Journal of Clinical Endocrinology & Metabolism.

“Patients always ask us what the chance is that their disease will come back,” Dr. Min said. “Our goal is to identify a biomarker that can reliably predict long-term remission of postoperative Cushing disease.” He added that their research has found that postoperative day one morning cortisol level has significant correlation to the recurrence of Cushing’s disease. This measure is useful as guidance for clinicians performing patient follow-up after surgery, he said.

Drs. Laws, Min and Abreu Metzger also are studying corticotroph hyperplasia, which has the same symptoms as Cushing’s disease caused by pituitary tumors, despite the fact that no pituitary tumor can be detected. Because this condition is much more difficult to manage surgically, it underscores the importance of developing better medical treatments that can target the overproduction of ACTH or related products.

The symptoms of Cushing’s disease, including weight gain, diabetes and high blood pressure, can wreak havoc on a patient’s health. But according to Dr. Laws, some of the most devastating effects on patients are the psychological ones, including depression and anxiety.

“Patients usually know when their disease has recurred even before tumors show up on scans, because they remember what it feels like,” he noted. “It’s heartbreaking for them when they don’t stay in remission, and we want to do everything we can to be able to help.”

At the end of the day, the aim of studying why these tumors are often so difficult to cure is what drives this exceptional research program forward.