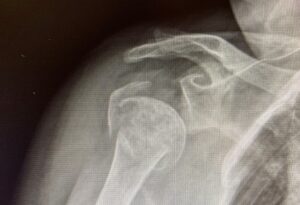 A network meta-analysis conducted by researchers at Brigham and Women’s Hospital adds to the growing body of evidence favoring nonsurgical treatment (NST) for older patients with 3- and 4-part proximal humerus fractures (PHFs).

The comprehensive literature analysis found that NST was associated with a lower rate of adverse events and additional surgery compared with open reduction internal fixation (ORIF). In all other respects, NST performed similarly to other surgical interventions, including reverse total shoulder arthroplasty (rTSA) and hemiarthroplasty (HA).

“These fractures are becoming more common as the population lives longer, more active lives,” said the study’s lead author, Arvind G. von Keudell, MD, director of orthopaedic geriatric trauma surgery and research at the Brigham and assistant professor of orthopedic surgery at Harvard Medical School. “If they are not properly treated, the joint can become stiff and patients can have difficulty performing activities of daily living like eating, showering, washing their hair or anything that requires an overhead reach.”

According to Dr. von Keudell, orthopaedic surgeons have several options for surgically treating 3- and 4-part PHFs, including ORIF, rTSA and HA. While HA recently has fallen out of favor compared with ORIF and rTSA, the superiority of any one surgical strategy has not been determined, and evidence that favors NST over surgical intervention is mounting. NST typically involves bracing the shoulder with a standard sling or cuff and collar.

“A limited number of previous studies and randomized control trials have started to chip away at this question, but they may not have well represented the patient population,” Dr. von Keudell said. “This network meta-analysis focused on older patients and compared multiple treatment options with each other instead of just one against another. Our aim was to determine the most successful treatment modality based on function outcome scores as well as adverse event and additional surgery rates.”

The analysis found that non-operative treatments are best for most 3- and 4-part PHFs. However, Dr. von Keudell cautioned that orthopaedic surgeons should critically analyze the fracture pattern and discuss the options, projected outcomes and potential complications with each patient before making a final decision.

“Surgeons and their patients need to weigh the risks and benefits of surgery against the risks and benefits of nonsurgical treatment, understanding that NST may come at the cost of slightly reduced functional outcomes,” Dr. von Keudell said. “Of the surgical options, we found rTSA has the best functional outcomes and lowest rate of adverse events.”

Dr. von Keudell also has studied the issue of PHF treatment outcomes and complications from both window-of-opportunity and age standpoints. Until recently, such research has been challenging. Furthermore, there have been few randomized control trials, making it difficult for studies to reach a point of statistical significance.

“When it comes to timing of surgery, we’ve found a slight outcome benefit to conducting rTSA within four weeks, rather than waiting longer,” Dr. von Keudell said. “We’ve also found that age does not appear to have an effect on outcomes, with no differences detected between older and younger patients.”

He said the next step in the evolution of this research would be large, randomized control trials comparing operative and non-operative approaches.

“The Brigham is committed to being at the forefront of understanding what is best for our patients and staying at the leading edge of optimizing individualized orthopaedic care,” Dr. von Keudell concluded. “We are one of the very few academic institutions demonstrating this type of leadership.”