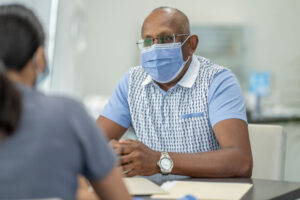 U.S. veterans aged 75 years or older who were prescribed statins had a 25 percent lower risk of death than their counterparts, according to a retrospective cohort study led by investigators from Brigham and Women’s Hospital and the VA Boston Healthcare System. The analysis also found the risk of dying from a cardiovascular event, such as a heart attack or stroke, was lower by 20 percent among veterans treated with statins.

Ariela R. Orkaby, MD, MPH, a physician scientist in the Brigham’s Division of Aging and at the VA Boston Healthcare System, was lead and corresponding author of the study, published in JAMA.

As a geriatrician who also works at a preventive cardiology clinic at the VA Boston Healthcare System, averting heart disease is an area of clinical focus for Dr. Orkaby. For years, she had been frustrated by the lack of data on prescribing statins to older patients. The 2013 American College of Cardiology/American Heart Association cholesterol guidelines, for example, offered no recommendations on the topic.

“We were essentially writing off a huge segment of the population that may be the most likely to benefit from statins,” Dr. Orkaby said. “Cardiovascular events happen most commonly in older adults, and I felt it was ageist and unfair that we didn’t have the data. I’ve dedicated the past six, seven years to trying to understand whether there’s a role for preventive medications in older adults.”

Dr. Orkaby and her colleagues leveraged national data from the U.S. Veterans Health Administration Services and Centers for Medicare & Medicaid Services. The data spanned more than 300,000 veterans who were 75 years or older and free of atherosclerotic cardiovascular disease at baseline.

The finding that statin therapy was significantly associated with a lower mortality risk came as a surprise to Dr. Orkaby.

“I am a board-certified geriatrician and have read and learned a lot about the role of deprescribing and stopping medications, which we think takes many, many years to benefit the patient. The assumption is that many older adults won’t live long enough to see the benefit,” she said. “I was not expecting these results, and I don’t think my cardiology colleagues were either.”

Dr. Orkaby and her fellow investigators subsequently repeated the analysis in multiple subgroups. They found lower death rates among veterans using statins in a variety of cases, such as in those with dementia as well as Black veterans and veterans who were 90 years or older.

“We kept seeing the same signal in the types of patients that I see in my clinic — people who have dementia, people who have arthritis, people who have diabetes. It was a powerful signal,” she said. “These findings reinforce that age alone shouldn’t determine whether or not to prescribe statins. You still have to consider this option or at least have a conversation with your patient.”

Dr. Orkaby is currently serving as the site principal investigator at the VA Boston Healthcare System for PRagmatic EValuation of evENTs And Benefits of Lipid-lowering in oldEr adults (PREVENTABLE). This randomized, clinical trial, in which 100 health systems across the country are participating, is examining the benefits of statin use in people 75 years or older.

Recognizing the inherent limitations of observational studies, she hopes to see more randomized, clinical trials of statin use in older adults in the years to come.