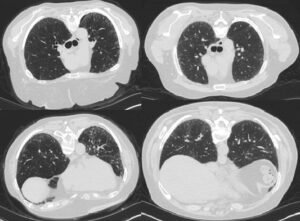 Idiopathic pulmonary fibrosis (IPF) is more common than once thought. According to the American Lung Association, over 130,000 people are affected in the United States and about 50,000 new cases are diagnosed each year.

“IPF has a mortality rate that’s worse than that of most cancers, yet it gets far less attention,” said Gary “Matt” Hunninghake, MD, director of the Interstitial Lung Disease Program at Brigham and Women’s Hospital. “Because of that, our group has been trying to find ways to detect this disease at its early stages, which we think could eventually lead to better outcomes for those at risk.”

IPF often does not cause symptoms until it’s at an advanced stage. So, to learn more about what early disease looks like and how it behaves, researchers took advantage of a distinct feature of the disease: About 30 to 40 percent of cases have a strong hereditary component. This is different from other common lung diseases such as emphysema and chronic obstructive pulmonary disease, which are overwhelmingly caused by smoking and other environmental factors.

Looking to Relatives for Clues

In May 2020, Dr. Hunninghake had a study published in the American Journal of Respiratory and Critical Care Medicine looking at family members of people with IPF. The researchers surveyed 105 first-degree relatives of patients with IPF. The family members were screened with questionnaires, pulmonary function tests, chest CTs, blood sampling for immunophenotyping, telomere length assessment and genetic testing.

The researchers found that 31 percent (33 individuals) had evidence of chest CT abnormalities, which may be a precursor to the more serious IPF. Their findings suggested that undiagnosed interstitial lung disease may be present in greater than one in six older first-degree relatives of IPF patients.

“These findings suggest that it would be rational to screen for IPF in close relatives,” Dr. Hunninghake said. “It also provides an opportunity for us to learn more about the earlier stages of IPF, if we can identify and follow these family members.”

A Focus on Preventive Care for IPF

According to Dr. Hunninghake, the ultimate goal of this research is to create better diagnostic methods and to eventually develop interventions for treating the disease early. “The paradigm is similar to the approach that’s been used over the years with cardiovascular disease,” he said. In the past, most people who had heart attacks experienced poor outcomes. Now, a significant component of cardiovascular disease care and research is focused on preventive cardiology.

“We think that same preventive model could be applied to IPF in the future,” he noted. “We can identify those who are at highest risk of having bad outcomes so that we can intervene.”

According to Dr. Hunninghake, studies published in 2014 demonstrating that pirfenidone and nintedanib showed some efficacy in treating IPF marked a turning point for treating the disease. “These drugs don’t provide a cure, but they do slow down the progression of the IPF by targeting fibrotic pathways,” he said.

Dr. Hunninghake and his colleagues, whose previous research was funded by the National Heart, Lung, and Blood Institute, have applied for additional funding to continue studying IPF in families. “We hope that one day we can identify interventions—not only pharmaceuticals, but lifestyle interventions—that might benefit people with this disease,” he concluded.