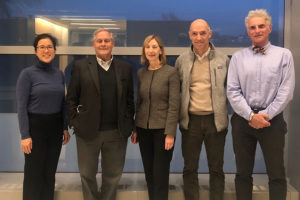 The Division of Rheumatology, Inflammation and Immunity at Brigham and Women’s Hospital was well-represented among the presenters, moderators and award recipients at the American College of Rheumatology’s (ACR’s) annual meeting, held in November in Atlanta.

“This is a meeting where rheumatologists and scientists from all over the globe come together to share ideas and make connections,” said Daniel Solomon, MD, MPH, chief of the Section of Clinical Sciences in the Division of Rheumatology, Inflammation and Immunity. “For a single institution to contribute such a considerable proportion of research at a single meeting is noteworthy.”

Experts from the Brigham presented significant research in disease areas such as lupus, vasculitis, psoriatic arthritis and ankylosing spondylitis, according to Dr. Solomon. Another important topic at the meeting was immunophenotyping for patients with rheumatic diseases. This effort aims to guide treatment decision-making and eventually develop more personalized therapies for different subsets of patients based on the subtypes of immune cells driving their disease.

A Number of Honors

Recently, two members of the division have taken on major leadership roles within the ACR. Ellen M. Gravallese, MD, who became chief of the Brigham’s Division of Rheumatology, Inflammation and Immunity in November, officially took up the mantle as the 83rd president of the ACR. Her term will run from November 2019 to November 2020. Meanwhile, Dr. Solomon was named editor-in-chief of Arthritis & Rheumatology, the major journal in American rheumatology.

At this year’s ACR annual meeting, members of the division were presented with several awards and appointed to leadership positions during the annual meeting, including:

Sarah Kim Chen, MD, MPH, received a Distinguished Fellow Award. Dr. Chen’s research focuses on the use of prescription opioids among patients with rheumatic diseases compared to people with other diseases, including hypertension.

Jonathan Scott Coblyn, MD, and Simon M. Helfgott, MD, were appointed ACR Masters. This prestigious designation honors members who have made outstanding contributions to the field of rheumatology through scholarly achievement and/or service to their patients, students and profession. Dr. Coblyn, whose research focuses primarily on rheumatoid arthritis, is director of clinical rheumatology and director of the Center for Arthritis and Joint Diseases. Dr. Helfgott’s research focuses on the medical treatment of rheumatoid arthritis and other inflammatory disorders.

Maura Daly Iversen, MPH, DPT, ScD, received a Lifetime Achievement Award from the Association of Rheumatology Professionals, a division of the ACR. Dr. Iversen is a behavioral scientist and epidemiologist whose research focuses on clinical and translational trials of exercise to manage arthritis symptoms and reduce cardiovascular risk.

Katherine P. Liao, MD, MPH, received the Henry Kunkel Young Investigator Award, which recognizes physician-scientists aged 45 or younger who have made outstanding contributions to basic or clinical research in the field of rheumatology. Her lab is developing bioinformatics methods to study rheumatoid arthritis and the clinical and genetic factors that lead to outcomes such as cardiovascular disease and severe joint damage.

Beyond the awards given out at the ACR meeting, Sonali Parekh Desai, MD, MPH, also of the Division of Rheumatology, Inflammation and Immunity, was given the Donabedian Award in Quality and Safety from the American Public Health Association on November 5. Dr. Desai, medical director for ambulatory patient safety at the Brigham, is leading work to reduce diagnostic errors through an ambulatory safety net program focused on missed and delayed diagnosis of cancer.

“The Division of Rheumatology, Inflammation and Immunity continues to be one of the top-ranked programs in the United States,” Dr. Solomon said. “The members of the division demonstrate outstanding leadership throughout all aspects of the field, including clinical care, research, publishing and teaching.”