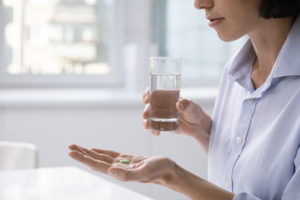 In the first randomized trial analysis of estrogen therapy after bilateral oophorectomy, women who underwent surgical menopause followed by estrogen therapy in their 50s showed a nearly one-third reduced risk of mortality over 18 years compared to women who received a placebo instead of estrogen. Older women (particularly age 70 and over) showed no such benefit and experienced a negative net effect from hormone therapy.

JoAnn Manson, MD, DrPH, chief of the Division of Preventive Medicine at Brigham and Women’s Hospital and lead author of the study, said the findings may help inform clinical decision-making about the use of estrogen therapy.

“Our findings suggest that estrogen therapy is relatively safe in women who have a hysterectomy and are below age 60, regardless of whether or not they had their ovaries removed,” Dr. Manson said. “Among these younger participants who had ovaries removed, we see a benefit in terms of long-term mortality for those assigned to take estrogen. In contrast, women had net adverse effects from estrogen if they were above age 70.”

The study results were published in Annals of Internal Medicine in September 2019.

Of approximately 425,000 women in the United States each year who have a hysterectomy for benign causes, about one-third to one-half elect to have their ovaries removed. While studies have found that bilateral salpingo-oophorectomy (BSO) can reduce future risk of ovarian and breast cancer, there is also evidence that women who have the procedure, especially before age 45, are at increased risk of coronary heart disease, osteoporosis and other long-term health concerns.

Dr. Manson and a team of investigators collaborating on the NIH-funded Women’s Health Initiative (WHI) set out to determine whether estrogen therapy could offset some of these risks. They analyzed outcomes from the WHI Estrogen-Alone Trial, a randomized trial of estrogen therapy in 10,739 women, aged 50 to 79 years, who had undergone a hysterectomy (40 percent of whom had their ovaries removed). Participants received either estrogen or placebo pills. Investigators measured incidence of coronary heart disease and invasive breast cancer, the trial’s two primary endpoints, as well as all-cause mortality and a “global index” that included a composite of major health outcomes (heart disease, breast cancer, strokes, lung blood clots, colorectal cancer, hip fractures, and deaths from all causes). Participants were treated for an average of seven years and were followed for an average of 18 years.

“Previous analyses had suggested that estrogen’s effects might differ by age group, so we paid particular attention to this variable,” said Dr. Manson. “While we found a neutral effect of estrogen therapy on health outcomes in the overall study population, important differences emerged when we examined results by age group.”

Brigham and Women’s Hospital has been a vanguard WHI center. Manson, a leader of several landmark women’s health studies, has been the WHI’s principal investigator at the hospital since the WHI began in 1993.

However, among women whose ovaries were removed, age affected the health effects of taking estrogen. During the 7-year treatment period, estrogen was significantly associated with increased risk of adverse events among older women (ages 70 and older at the start of the trial) but not for women in their 50s or 60s.

Dr. Manson pointed out that the study results are consistent with recommendations of professional societies that endorse the use of estrogen therapy in women who have early or premature menopause, continuing at least until the average age at menopause (approximately age 51). But she added: “Our research suggests that the favorable benefit-risk ratio of estrogen therapy extends well into a woman’s 50s and that the benefits among women whose ovaries have been removed appear to outweigh the risks until about age 60.”

Ultimately, the decision on use of estrogen therapy is an individual one between physician and patient, weighing severity of menopausal symptoms against risks and benefits of treatment for the patient’s individual situation.

“Decisions about hormone therapy use are complex and require shared decision making with the patient,” Dr. Manson said. “But if a woman has bothersome hot flashes, night sweats or other menopausal symptoms, the overall evidence suggests that estrogen therapy, and even estrogen plus a progestogen, tend to have a favorable benefit-risk ratio for women below age 60.”