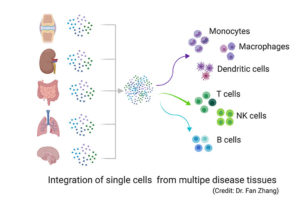 This November, members of Brigham and Women’s Hospital’s Division of Rheumatology, Inflammation and Immunity presented several groundbreaking studies at the American College of Rheumatology’s (ACR’s) annual meeting in Atlanta.

The lupus study was led by investigator and clinician Candace H. Feldman, MD, MPH, ScD. She and her colleagues used billing claims data for Medicaid beneficiaries to look at vaccine-preventable illnesses for which lupus patients end up in the emergency room or hospital. They found a significant burden of acute care use for these conditions that could be prevented with vaccines.

Many lupus patients have difficulty accessing outpatient care, where most preventive services are provided. Obstacles include transportation problems, an inability to miss work due to financial constraints and a lack of childcare. Dr. Feldman noted that she and colleagues focused on conditions that would be potentially avoidable or whose harm or adverse events would be lessened through sustained access to high-quality outpatient care.

According to Dr. Feldman, studies have shown that lupus patients tend to have low rates for several vaccines, including human papillomavirus (HPV), influenza and pneumococcal disease. “Also, compared with the general population, people with lupus are more susceptible to infections both from the disease itself and from the medications that suppress their immune system and are more likely to have severe complications if they develop these infections,” she added.

One reason vaccines may be overlooked, Dr. Feldman explained, is that patients with complicated illnesses usually have a number of other things to discuss during clinic visits. She pointed out that a few studies, mostly case reports, have suggested that vaccines may be unsafe for people with autoimmune diseases like lupus, but stressed that larger studies have refuted these findings and confirmed that these non-live vaccines are both safe and efficacious for most patients with lupus.

The single-cell analysis study included an in-depth examination of immune cells from people with immune dysfunction, such as rheumatoid arthritis, lupus nephritis, ulcerative colitis, Crohn’s disease and interstitial lung disease. All samples were from human tissues and compared to tissues of the same type taken from noninflammatory or health samples.

“Traditional bulk RNA sequencing provides average quantifications of gene expression across different populations of cells. Recent advances of single-cell technologies have provided single-cell transcriptomics to unbiasedly uncover diverse immune cell populations from disease tissues,” said Fan Zhang, PhD, a computational biologist at the Brigham, Harvard Medical School and the Broad Institute of Harvard and MIT, who presented the work at ACR. “Single-cell analysis gives us a much higher resolution and allows us to quantify many finer immune subtypes and their contributions to disease pathogenesis in each individual sample.”

The data used in this study came from several publicly available datasets, including the single-cell data generated by the Accelerating Medicines Partnership RA/SLE consortium, which is funded by the National Institutes of Health’s National Institute of Arthritis and Musculoskeletal and Skin Diseases and several pharmaceutical companies.

“Many researchers have done immunogenomics research with a focus on only a preselected cell type and one immune dysfunction disease,” Dr. Zhang said. “Something that was unique about our study was that we compared multiple immune cells from similar inflammatory diseases from different tissues and organs. Thus, there was obviously a computational challenge that required a lot of multidata integration as well as an understanding of immunology and rheumatology.”

“Our research showed what these diseases have in common and also what’s different about them,” Dr. Zhang said. “They suggested new approaches for common therapeutic drugs based on the shared inflammatory immune cells, which may be effective for a number of different autoimmune diseases. I think integration of computational biology and immunogenomics with the field of rheumatic diseases is promising and will generate new insights for drug discovery.”