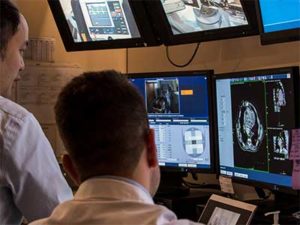 Ventricular tachycardia (VT) in patients with structural heart disease can be life-threatening and often requires a multi-pronged treatment strategy. While implanted defibrillators can detect arrhythmias, shocks can be painful and sometimes harmful.

Medications can help manage or eliminate VT, but they can have limited efficacy and toxicities. And while radiofrequency catheter ablation can destroy abnormal heart tissues, success rates range from 49 to 75 percent.

“What if we could get around these limitations and treat cardiac arrhythmias with a noninvasive procedure?” asks Paul C. Zei, MD, PhD. “When I came to the Brigham two years ago, I proposed the idea of directing radiation energy to an arrhythmia source in the same way it’s done to treat tumors,” says Dr. Zei, an electrophysiologist in the Division of Cardiovascular Medicine at Brigham and Women’s Hospital.

Prior to joining the Brigham, Dr. Zei developed the use of radiation to treat VT, known as stereotactic body radiation therapy (SBRT), which was originally designed in the 1950s to treat brain tumors. In collaboration with Thomas Fogarty, MD, a former cardiac surgeon, the two proved SBRT’s value in pre-clinical research and a successful first-in-man treatment.

In 2017, Dr. Zei returned to the Brigham—where he had done his residency, internal medicine internship, and fellowships in cardiology and electrophysiology—bringing this cutting-edge treatment approach with him.

Delivering Radiation to the Heart?

Dr. Mak has spent his entire career trying to avoid harming the heart when delivering radiation to the chest. In 2019, he published a paper with Anju Nohria, MD, director of the Brigham’s Cardio-Oncology Program, on the cardiac complications of radiation therapy in lung cancer patients in the Journal of the American College of Cardiology.

“As a radiation oncologist, I’m always thinking about ways to prevent cardiac injury from radiation, so when Dr. Zei approached me with the idea of treating cardiac arrhythmias by delivering high-dose radiation to patients’ hearts, it went against the grain of everything I have learned,” says Dr. Mak.

The Brigham is the First in the Northeastern U.S. to Provide SBRT

After realizing the technique’s promise, Dr. Mak and Dr. Zei spent two years learning how to target arrhythmias in human hearts, safely and effectively. The first patient was treated in December of 2018. To date, the Cardiac SBRT Program has treated six patients with recurrent VT under compassionate use.

“The idea of directing a concentrated radiation beam to an arrhythmia source in a noninvasive way is game-changing,” says Dr. Zei. “There’s been a tremendous interest in this therapy recently and the field is expanding rapidly. Not only is SBRT very low risk, it has been shown to be quite effective.”

The Brigham’s Cardiac SBRT Program is the first in the Northeastern U.S. and among the first in the world to provide SBRT to patients with refractory VT. In December 2019, the groundbreaking program was the cover story in the trade journal, EP Lab Digest.

Adapting Cancer Treatment for the Heart

To establish such a program, a hospital must have an electrophysiology group that sees high volumes of refractory VT as well as a radiation oncology department with state-of-the-art treatment capabilities. The Brigham has both.

To target VT effectively and safely, Dr. Zei and Dr. Mak had to overcome several technical challenges. First, they had to factor in the motion of the beating heart, and the movement of patients’ chests as they breathed.

To address these challenges, a team of electrophysiologists, radiation oncologists, and radiation physicists perform a cardiac mapping session that involves X-rays and 3-D images to define high-yield VT regions and identify radiosensitive structures to avoid.

This planning process takes about three or four days. Cardiac-gated CT and respiratory- gated CT scans help estimate the motion of the heart as it beats and as the patient breathes, respectively. This detailed CT data is then combined with electrophysiology maps that have identified the location of the abnormal heart tissues.

During the treatment procedure, patients recline under a linear accelerator (LINAC Edge Radiotherapy System, Varian Medical Systems). A high dose of X-rays (25 Gy) is then delivered to the target while minimizing damage to the lungs, stomach and other areas of the heart. The noninvasive outpatient procedure takes about 40 to 60 minutes. After a short period of monitoring, patients are discharged on the same day as their procedure.

The Brigham has Treated Six Patients with Refractory VT

The six patients who have undergone SBRT treatment had long-standing VT and have often had multiple catheter ablation attempts, including the investigational needle ablations, with the Brigham being one of three hospitals in the U.S. to offer this cutting-edge technique.

All six of these patients have responded to SBRT treatment with reductions in their VTs. Three patients experienced complete elimination and tapered off their antiarrhythmic medications. Another patient required an additional ablation procedure to achieve elimination. Another has symptoms that are controlled with medication.

“One patient, a painter, had undergone multiple ablations, but was still experiencing multiple episodes of VT and was being shocked repeatedly by his defibrillator. He couldn’t paint because his arrhythmia medications made his hands shake. The SBRT program completely eliminated his ventricular tachycardia,” says Dr. Zei.

As assessed by chest scans and clinical evaluations, these six patients have not experienced serious toxicities. Common side effects include fatigue, hypotension, heart failure exacerbation, among others that can be managed. Currently, SBRT is only offered to patients with refractory VT who have no other options, but the program may expand to include more cardiac arrhythmias, such as atrial fibrillation.

“This is the beginning of a new field in radiation medicine. We still need to get better at pinpointing arrhythmia sources in the heart while continuing to minimize damage to the surrounding tissues, but there’s a tremendous amount of excitement that this non-invasive therapy could be a very promising option for refractory VT,” says Dr. Mak.

The Brigham Aims to Lead Multicenter Clinical Trials for SBRT

Going forward, the Brigham aims to be a lead center in developing an SBRT treatment protocol within the context of a large multicenter randomized study. Such a trial could lead to FDA approval for the treatment of VT in patients with no medical options.

“It’s still too early to say if cardiac SBRT will replace regular catheter ablation for VT as a first-line therapy, but it’s very likely to become an excellent option for patients who have at least failed prior catheter ablation attempts for their VT,” says Dr. Zei.

“In the field of cardiac arrhythmia, one of the biggest new areas of excitement and innovation is noninvasive ablation. It’s like something out of Star Trek and it’s amazing that it works. When I perform a typical catheter ablation procedure, the procedure takes several hours, often with general anesthesia, and the patient needs a day or two to recover in the hospital. Noninvasive ablation requires a lot of planning, but the patient lays down on the table, receives their treatment over the course of 15 minutes, gets up and walks away. This represents a huge potential paradigm shift in our field.”
–Usha B. Tedrow, MD, MS, director, Clinical Cardiac Electrophysiology Fellowship and clinical director, Ventricular Arrhythmia Program at Brigham and Women’s Hospital