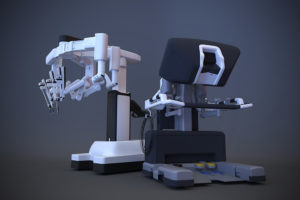 “Myomectomy was once a classic open procedure, typically associated with a high risk of complications. By embracing advanced hysteroscopic access and robot-assisted laparoscopic access, we have relegated the use of open myomectomy to a small minority of our cases and have made myomectomy a very safe day-surgery operation,” said Dr. Gargiulo, medical director of robotic surgery at Brigham Health, whose team was the first in New England to perform robot-assisted laparoscopic myomectomy (RALM) to treat fibroids.

Over the past year, fewer than 1 in 5 of the 155 abdominal myomectomies performed by the hospital’s minimally invasive gynecologists and reproductive endocrinology specialists required open surgery.

For intracavity fibroids that are reachable through natural orifice surgery, hysteroscopic excision is performed. For fibroids that are deep within the uterine wall, minimally invasive options include laparoscopic surgery, with or without robotic assistance.

Given the generally low adoption of conventional laparoscopic myomectomy, he expects RALM to be the option of choice for informed women as it becomes more available, both within and beyond childbearing years.

Despite evidence of clinical superiority and lower cost to society of minimally invasive myomectomy, open surgery has remained a first choice for many surgeons outside of highly specialized reproductive surgery centers. Conventional laparoscopic myomectomy, while beneficial to patients, can be difficult to master, due to the need for rapid suturing to address the continuous blood loss that occurs when the uterus is cut to remove each tumor. Even experienced laparoscopic surgeons, when challenged with such time constraints, have difficulty adapting to the monocular vision and the ergonomic challenges of laparoscopic surgery (which works on the principle of the fulcrum, with hand movements being inverted to the direction imparted to the instruments).

Robotic surgery has the potential to change the equation. While RALM requires capital investment and special training, the procedure itself is easier to master than traditional laparoscopic surgery, said Dr. Gargiulo.

Since robot-assisted surgery was approved for gynecologic surgery in 2005, Dr. Gargiulo and colleagues at CIRS have performed more than 1,500 robot-assisted procedures, including myomectomies, complex tubal and ovarian microsurgery and excision of pelvic endometriosis.

The FDA-approved da Vinci® Surgical System that is used in multiple departments at Brigham and Women’s Hospital consists of a dual surgeon’s console equipped with a control panel and a hi-definition monitor and a patient side-cart that is outfitted with slender robotic arms (including one equipped with a high definition 3-D magnification camera) and is attended by another surgeon and a nurse. The wristed capabilities of the robotic arms (and of the miniaturized robotic instruments) provide the dexterity and broad range of movements needed to carry out laparoscopic microsurgery of the same quality allowed by open surgery.

The Brigham’s division of reproductive endocrinology typically trains four or five fellows in robotic surgery over each three-year span.

At Brigham and Women’s, trainees learn and perfect their robotic technique at the STRATUS Center for Medical Simulation. Before operating on a patient, new users are required to pass validated simulation testing that has been shown to bring novices to the level of credentialed robotic surgeons. Gargiulo called robotic surgery “revolutionary” for this reason.

“It completely decouples the achievement of perfect technique from direct patient care,” he said. “When trainees learn a technique on the simulator, they are technically perfect when they perform the surgery on their first patient. Surgery becomes a matter of strategy and understanding of the pathology at hand, rather than an exercise in laparoscopic dexterity.”

Continuing to expand the capabilities of robotic technology, Dr. Gargiulo and colleagues recently described the novel technique of robotic single-site myomectomy (performed completely through a single incision in the umbilicus) and found it comparable in outcome to its multi-port counterpart. Although the technique is safe and has been replicated in other centers, its current applicability is limited. “We’ve done proof of principle,” Dr. Gargiulo said, “but we’re waiting for better technology.”

Myomectomy Instead of Hysterectomy for Perimenopausal Women?

While myomectomy is generally performed for fertility preservation, women who have completed childbearing and wish to preserve the uterus also are candidates for minimally invasive myomectomy for removal of fibroids instead of hysterectomy, Dr. Gargiulo said. Advantages of myomectomy over hysterectomy include: lower chance of hemorrhage and infection; no post-operative urinary incontinence; no loss of libido or other sexual disfunction; virtually no occurrence of urinary tract injury, rectal injury or vaginal cuff dehiscence; and no loss of ovarian function (which has been described even for ovary-sparing hysterectomy).

“Myomectomy has no increased complication over hysterectomy,” said Dr. Gargiulo, who refutes the notion that hysterectomy for benign fibroids in the post reproductive years is justified by the risk of recurrence after myomectomy. “Recurrence is an issue in women of reproductive age, but in women who are approaching menopause, estrogen-dependent tumors rarely will have time to grow back. The closer the patient is to menopause the more one should allow her to avoid the many perioperative complications of a hysterectomy, and have a myomectomy even past reproductive age, if that is her choice.”

Because fibroids generally shrink after menopause, he currently does not advocate post-menopausal myomectomy.