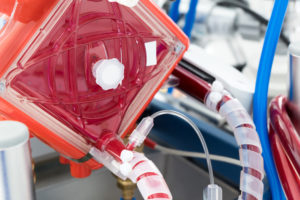 The Lung Center at Brigham and Women’s Hospital hosts the largest, and one of only two, lung transplant programs in New England. Through its use of extracorporeal membrane oxygenation (ECMO), the center is improving the outlook for patients with end-stage lung disease who otherwise would be considered too sick for transplant.

ECMO is a form of experimental mechanical life support in which an external artificial lung device (an “oxygenator”) acts to achieve gas exchange to maintain patients with advanced lung disease. Venous blood is withdrawn via large vascular cannula and then passed through the oxygenator by a pump before oxygenated blood is returned to the body to provide support for failing lungs.

“If clinicians have patients with illnesses like interstitial lung disease, chronic obstructive pulmonary disease or cystic fibrosis, they can feel confident making the referral to the Brigham,” said Steven P. Keller, MD, PhD, medical director of the ECMO mechanical support service. “Our transplant program has created a leading-edge ECMO program that is enabling us to successfully bridge to transplant many patients previously perceived to be without hope.”

Dr. Keller noted that the 2005 introduction of the lung allocation score, which prioritized patients with lower projected transplant-free survival, has increased the need for ECMO. As patients awaiting lung transplantation become sicker, ECMO enables them to remain active and participating in physical therapy to prepare for the rigors of surgery and post-transplant recovery. The device can keep patients with advanced lung failure viable for months during the wait for a donor organ.

“Lung transplant is more and more about sustaining the sickest patients so they can receive these organs,” he said. “ECMO has become a powerful tool to successfully bridge these patients to transplant. In fact, roughly a third of our transplant patients at The Lung Center were supported by ECMO prior to transplant.”

Creating a Bridge to Candidacy

An emerging application for ECMO at The Lung Center is what Dr. Keller called “bridge to candidacy.” Ideally, clinicians would be able to evaluate a prospective transplant patient before their disease has progressed very far. However, this isn’t always possible. For example, patients with interstitial lung disease are susceptible to acute exacerbations that can spark an extreme worsening of the condition without warning.

In cases like these, patients are quite sick and may not respond to traditional therapies. “We’ve expanded our use of ECMO to those patients with acute exacerbations of chronic disease as a means of sustaining them while we work to determine if they’re viable lung transplant candidates,” Dr. Keller said. “We’ve successfully bridged many of these patients to active candidacy and then on to successful lung transplantation.”

This application for ECMO is ahead of the curve and not without controversy, Dr. Keller acknowledged.

“There is an ethical challenge, as we risk supporting a patient who hasn’t yet completed the rigorous lung transplant screening process,” he said. “After initiating ECMO support, we may subsequently determine a patient isn’t a transplant candidate and then must make the gut-wrenching decision to withdraw support.”

However, Dr. Keller offered that this is similar to the decision to discontinue mechanical ventilation for patients with end-stage disease who aren’t transplant candidates. “We recognize that this process is very challenging for our patients, their families and the care team. We enter into this thoughtfully and do all we can upfront to determine if someone is a suitable candidate while simultaneously working to advance the technology to provide hope where previously none existed.”

Active on the Research Front

As part of the Harvard-MIT Biomedical Engineering Center, Dr. Keller is investigating ECMO as a mechanical support device as well as other mechanical heart and lung support devices. One area of focus is making ECMO and related technologies more accessible throughout the healthcare system. To that end, he has a novel device in development to support patients with hypercapnic respiratory failure.

“It’s called an extracorporeal CO2 removal device,” he explained. “It removes CO2 at very low blood flows, at about 300 or 400 milliliters per minute of blood flow as opposed to the four or five liters of blood flow that’s done with ECMO. That way, we could make available an organ replacement therapy at smaller hospitals that don’t have the level of technical expertise needed to operate ECMO.”

The CO2 removal device has gone through animal testing, and Dr. Keller hopes to move on to first-in-human studies within two years. He is also looking at ECMO as a mechanical circulatory device, examining the interactions between the heart and the device to optimize how to profuse the body while limiting damage to the heart.

While ECMO was developed in the 1970s, it has not been subject to intensive research. (As noted in a 2014 paper, “the use of ECMO outpaces the data.”) Dr. Keller expressed concerns about the rapid growth of ECMO, particularly since the 2009 H1N1 flu epidemic, at centers without the ability to manage it properly.

“It’s a complex device that requires active titration, active management and a lot of expertise to understand its physiologic impact. It’s not simply inserting it and turning it on,” he said. “It requires an enormous amount of knowledge and understanding to use successfully and a lot of experience. There’s a real need for basic and bench-top research to enhance our understanding of how ECMO affects patients, and I want to contribute in that capacity.”