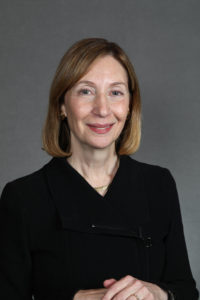 Brigham and Women’s Hospital welcomes Ellen M. Gravallese, MD, as the new chief of the Division of Rheumatology, Inflammation, and Immunity. Dr. Gravallese has a long list of accomplishments in her career as a rheumatologist, immunologist and basic scientist.

The appointment, which took effect in October, was one in a string of highlights for Dr. Gravallese in 2019. In May, she was awarded the prestigious Carol Nachman Prize in Wiesbaden, Germany, for career achievements in rheumatology research. In November, she was installed as the 83rd president of the American College of Rheumatology (ACR).

One of her top priorities as ACR president is to address the serious workforce shortage in rheumatology by creating more fellowship opportunities and raising funds for training. She is optimistic about the progress being made on this front.

“The number and quality of the applicants in rheumatology has increased dramatically in recent years,” said Dr. Gravallese, who has been on the ACR’s Executive Committee since 2016. “Top-notch trainees and investigators are choosing rheumatology now—that’s an important trend. I think these trainees are encouraged by the many new discoveries in immunology and other areas of basic science that are relevant to our field. We’ve already seen one wave of immunologic discoveries be translated into therapies that have transformed the field and dramatically changed the lives of our patients.

“There’s a lot of excitement in rheumatology. We want to be able to capture all of these talented young physicians and train them in our field. It’s important that we don’t lose them to other specialties.”

While serving her one-year term as ACR president, Dr. Gravallese will take a break from her role as associate editor at The New England Journal of Medicine. However, she will stay active with her research, which has always been central to her work.

Dr. Gravallese’s research on fundamental mechanisms of inflammation and joint destruction in inflammatory arthritis has changed the understanding and focus of treatment for rheumatoid arthritis and furthered the development of a new area of scientific investigation termed “osteoimmunology.”

A current area of focus for Dr. Gravallese’s laboratory is innate immune mechanisms of disease. “As we learn more about rheumatic diseases, we realize that some of the immune mechanisms that the body uses to fight off infection are also playing a role in autoimmunity,” she explained. “We’ve been very interested in several of these pathways, especially the nucleic acid-sensing pathways, which seem to be involved in the pathogenesis of autoinflammatory diseases. We’re working to understand these pathways both in inflammatory diseases and in bone homeostasis.”

Returning to Her Roots

Dr. Gravallese is enthusiastic about joining a division with a strong commitment to advancing the field through innovations in patient care and research.

“Within the division, there is a very strong section of clinical sciences looking at, among other things, phenotyping of rheumatic diseases and using artificial intelligence and natural language processing to mine electronic health records in this area,” she said. “On the basic science side, investigators in the division are identifying specific immune cell types within diseased tissue and applying single-cell RNA sequencing techniques to better understand the pathways that are involved in inflammation in rheumatoid arthritis and lupus.”

Dr. Gravallese has deep roots at the Brigham. After earning her MD from the Columbia University College of Physicians and Surgeons, she completed a joint residency program in both internal medicine and pathology at the Brigham, followed by a fellowship in rheumatology. She then served on the faculty of the hospital from 1991 to 1998. Before returning to lead the Division of Rheumatology, Inflammation, and Immunity, she spent 13 years as chief of the Division of Rheumatology at UMass Medical School.