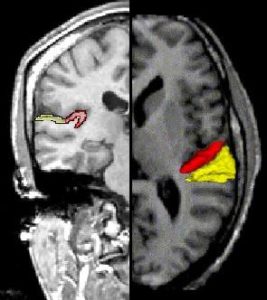 Thanks to imaging technologies like CT, MRI and PET, researchers who study the brain are able to peer inside its “black box” to learn how different parts of the brain interact and how those interactions change in response to disease or injury.

The Psychiatry Neuroimaging Laboratory at Brigham and Women’s Hospital, directed by Martha E. Shenton, PhD, was established to understand more about brain abnormalities and their role in neuropsychiatric disorders. The lab makes use of state-of-the-art neuroimaging techniques.

“From the beginning, my research has been focused on developing and refining new technology to study schizophrenia and traumatic brain injury [TBI] in living brains,” said Dr. Shenton, who founded the laboratory in 2005. “We are excited to be taking this research into the clinic.”

Visualizing Brain Changes Across the Lifespan

Much of Dr. Shenton’s work has concentrated on MRI. Unlike types of imaging that provide far less detail, MRI enables researchers to distinguish between the gray matter (which contains the cell bodies, dendrites and axon terminals of neurons, as well as the synapses) and the white matter (which is made of the axons that connect different areas of gray matter to each other). They can also use it to analyze the flow of fluid between different parts of the brain.

One of the major goals of the laboratory is to build an atlas of what normal brains look like across the entire human lifespan. This will enable both researchers and clinicians to better understand changes over time and changes in response to damage.

“When you test someone’s cholesterol levels in the blood, you need to know the normative range to test it against,” Dr. Shenton explained. “It’s the same with brain scans. If you are looking at someone who is 30 years old and has a concussion, you want to know what to expect in a healthy brain that’s been matched for age, gender and other factors. That gives you a better understanding of how severe the injury is and how it may be affecting brain function.”

Dr. Shenton believes the tools she’s developing will eventually lead to better diagnostic and predictive models for schizophrenia and other neurological disorders. “By identifying individuals who are at high risk for developing schizophrenia and studying them over time, we can determine how measures like inflammation in the brain may affect the onset and progression of the disease as well as how it responds to therapy,” she said.

She added that this research may lead to better clinical trials for schizophrenia by enabling better classification of patients by the particular features of their disease. “Schizophrenia is a very heterogeneous disease, and not everyone is going to respond to the same drug in the same way,” she said. “If we can figure out how to group people into smaller, more homogeneous groups based on the characteristics of their disease, we’ll be able to match them better to the right clinical trial.”

Dr. Shenton is also participating in research on TBI and chronic traumatic encephalopathy (CTE) funded in part by the National Institute of Neurological Diseases and Stroke. She along with other researchers on the team are looking at levels of tau and amyloid-beta proteins in the brain to understand how changes here may lead to complications later in life, as CTE is currently a diagnosis only at post-mortem. Being able to track brain changes over time will thus provide more information that may assist in detecting those most vulnerable to CTE and other neurodegenerative diseases.

“We hope to eventually collect enough data to help football players understand their risk for future brain complications,” she concluded.