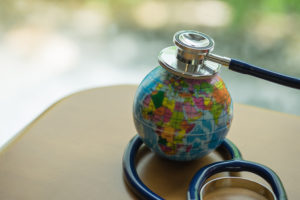 Nearly 71 million people globally are projected to be displaced from their homes due to disasters, conflicts and disease outbreaks by the end of 2019. Citizens of low- and middle-income countries (LMICs) are disproportionately victimized in humanitarian crises like these, with an average displacement duration of 27 years.

Diabetes has a massive impact on the world’s refugee population. It is one of the most common non-communicable diseases (NCDs), affecting about half a billion people worldwide, 80 percent of whom reside in LMICs. Furthermore, it claims more lives each year than HIV/AIDS, tuberculosis and malaria combined.

Diabetes in low-resource settings has been a longstanding point of interest for Brigham and Women’s Hospital endocrinologist Sylvia Kehlenbrink, MD. As director of the Brigham’s Global Endocrinology Unit, she is now leading the charge to enhance diabetes care in humanitarian crises worldwide. This year, she has made impressive progress on the path to achieving this mission.

Several years ago, when developing the Harvard Humanitarian Initiative’s program on Non-Communicable Diseases in Conflict, Dr. Kehlenbrink spoke with people working on the issue of NCDs, particularly diabetes and hypertension, across the globe. She heard first-hand about how disruptions in health services and supplies of food and medicine often exacerbate chronic health conditions like diabetes, which can lead to complications or even death.

“I found there was a lot of interest and many organizations starting to plan their strategies and address this problem,” she said. “But there was also a lot of overlap and not enough communication. Since the workers are few and the problem is massive, I felt we really needed to collaborate and not duplicate efforts.”

With this goal in mind, Dr. Kehlenbrink and Lindsay Jaacks, PhD, assistant professor of global health at the Harvard T. H. Chan School of Public Health, set out to organize a symposium on “Diabetes in Humanitarian Crises.” Held at Harvard Medical School in April, the event attracted over 100 leaders in global health.

“You could feel the palpable energy in the room,” Dr. Kehlenbrink recalled. “One of the strengths was that people from different sectors with different opinions and perspectives showed up. There were some heated conversations, but we were able to agree on some basic principles, and that’s a huge first step in negotiating and finding a way forward.”

The output of the symposium was the Boston Declaration, which was signed by 64 representatives of over 40 international organizations and outlines four major priorities for the next three years:

The Boston Declaration was published online by The Lancet Diabetes & Endocrinology in June, one day before Dr. Kehlenbrink spoke on the subject at the American Diabetes Association’s annual Scientific Sessions. (It subsequently appeared in the August edition of the print publication.)

In addition, a consortium of international organizations was formed with the aim of addressing the targets outlined in the Boston Declaration. Dr. Kehlenbrink is focusing on attracting financial support, while working groups have been established to take on responsibilities in other key areas.

“One of the big things is going to be social media and advocacy,” Dr. Kehlenbrink said. “We need to get the word out about what we’re doing, making it relevant to the younger generation, inspiring passion and ultimately getting the funding for the larger issues.”

“We feel like this is the beginning of a movement,” she added. “There’s huge potential, and we’re just getting started. We’re excited to see where it goes.”

If you would like to get involved with efforts to meet the Boston Declaration’s priorities, please email Dr. Kehlenbrink.