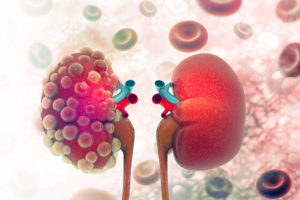 Researchers from Brigham and Women’s Hospital are collaborating with colleagues at Harvard Medical School to examine the use of gene therapy for treating four age-related diseases: obesity, type 2 diabetes, heart failure and kidney failure.

The goal of their work is to demonstrate a new approach to combination gene therapy that will improve patient health and longevity by addressing multiple diseases at once. Their animal-model study was published in the Proceedings of the National Academy of Sciences in November 2019.

“Until now, gene therapy has focused primarily on rare diseases,” said Joseph H. Bonventre, MD, PhD, chief of the Brigham’s Division of Renal Medicine. “This is the first study, to our knowledge, that focuses on treating multiple common diseases at one time with combination gene therapy.”

While diseases traditionally are researched and treated individually, a systems-level view of the aging process is crucial to increasing an individual’s health span. Co-morbidity is common as people age, and many age-related diseases are interconnected. Diabetes and obesity are linked to heart and renal failure, and both organs can suffer from fibrosis. Renal failure is linked to cardiovascular diseases, and obesity contributes to several chronic diseases.

Patients with such co-morbidities are often treated by multiple specialists and must take a variety of medications, each of which narrowly influences a particular pathway involved in the pathogenesis of a single disease.

“We could decrease the medication burden on patients and reduce the accumulative risk of side effects by treating all of these disease processes with a single therapeutic molecule,” Dr. Bonventre suggested. “We chose to investigate adeno-associated virus [AAV] mediated gene therapies because AAVs have been used successfully with patients in other contexts and tend to be better tolerated than other viral approaches.”

In the animal-model study led by Noah Davidsohn, PhD, Wyss Research Scientist with Harvard Medical School’s Church Lab, researchers developed and tested delivery of three genes, individually and in varied combinations, using AAVs: FGF21, αKlotho and soluble TGFβ1receptor 2 (sTGF β1R2). They found that diverse pathologies could be effectively treated, and in some cases even reversed, with a single dose. They also discovered that a single formulation combining two separate therapies (AAV:sTGFβ2 and AAV:FGF21) was able to treat all four diseases.

Reducing the Progression of Kidney Fibrosis

Dr. Bonventre’s role in the study focused on how the AAV gene therapies reduced the amount and progression of kidney fibrosis after blockage of drainage of urine from the kidney. Unilateral ureteral obstruction is an established means of simulating progressive renal fibrosis. Fibrosis leads to end-stage kidney disease, resulting in the need for patients to undergo kidney dialysis or transplantation.

All the individual therapies and their combinations elicited a positive effect on the number of cells that secrete molecules that result in fibrosis and reduce the atrophy of the kidney medulla. The double formulation (AAV:sTGFβR2 and AAV:FGF21) had higher therapeutic effect compared to the individual gene therapies. The performance of both AAV:FGF21 and AAV:αKlotho was better when each was evaluated individually as opposed to when they were combined.

“We have a high incidence of chronic kidney disease in the United States, about nine to 12 percent of the population,” Dr. Bonventre said. “This is a strong focus area here at the Brigham, both in terms of research and clinical care. We are planning to follow up on this study with future research on adeno-associated viruses delivering cargo that specifically target kidney fibrosis or introduce molecules that can improve kidney function and prevent disease progression.”