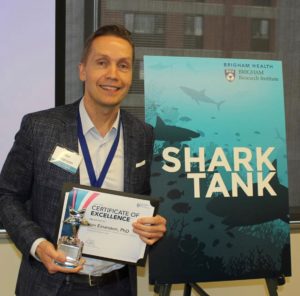 Jon I. Einarsson, MD, MPH, didn’t set out to be an inventor. Chief of the Division of Minimally Invasive Gynecologic Surgery at Brigham and Women’s Hospital, Einarsson is a champion of minimally invasive approaches for their benefits to patients. But as a teacher and mentor, he knows that some techniques that benefit patients are slightly more challenging technically for trainees and others to master.

“I’ve watched my residents and mentees struggle and thought, ‘This could be done in a better way. Complications could be avoided.’ You want to make it easier and safer,” Einarsson said. Neither an engineer by training nor a tinkerer by hobby, Einarsson’s desire to improve the ease and safety of minimally invasive gynecological surgery has led to one idea after another. With institutional support from Brigham and Women’s and his own perseverance, five devices that he initiated are now in various stages of development.

Brigham and Women’s Department of Obstetrics and Gynecology opened one of the first divisions of minimally invasive gynecologic surgery (MIGS) in 2006, with Einarsson as director, continuing to build upon the hospital’s history of innovation in women’s health. Since then, the percentage of procedures done laparoscopically has grown to approximately 90 percent of hysterectomies and at least 75 percent of myomectomies, with patients now coming from throughout the US and beyond. In 2008, Einarsson began a MIGS fellowship program and since 2009 has led a Harvard Medical School CME course in MIGS. He also is a former president of the AAGL, the largest subspecialty organization in minimally invasive gynecologic surgery.

Three devices developed by Einarsson address what he identifies as challenges in laparoscopic hysterectomy: One is designed to improve separation of the uterus from the vagina during colpotomy; another aims to safely remove tissue; and a third has been developed to provide rapid and standardized closing of the vaginal cuff.

Two of the devices have been licensed by a large medical device company. “This is validation that our efforts are on track for useful and meaningful improvements that can help patients,” Einarsson said.

Further along in development is an abdominal access device created to address the risks of blind entry during the first incision of laparoscopic abdominal surgery. In current practice, injury to the bowel or a large vessel, though rare, may go unnoticed and cause peritonitis or other serious complication later.

Einarsson’s proposed device is designed to significantly reduce the risk of unrecognized injury. Human studies of the device are expected to begin by the end of 2019.

Another Einarsson innovation now at an early stage is an incision-less office-based screening and risk assessment tool for ovarian cancer and endometriosis. Earlier this year, his proposal won a shark tank-style event that occurs twice yearly within Brigham and Women’s Hospital. Along with other finalists, he presented a five-minute pitch for his project, followed by questions from a panel of experts and industry leaders. He is using the $50,000 Health & Technology Innovation Award to build a prototype, with hopes of further funding and development.

Help from a Culture of Innovation and Mentors Along the Way

In his journey as a physician-inventor, Einarsson said he has benefited from his institution’s support, particularly in patent searches and expertise in intellectual property. Grants such as the Shark Tank prize encourage innovation and provide early funding.

An important lesson, he said, was to seek help from experts at every step – from patents to prototype materials to interacting with industry. His advice to other would-be inventors: “Form a team so you don’t do it all on your own.”

But each step, for each device, requires perseverance. “It’s definitely a challenging process. It takes a long time and you must be prepared to fail and to try again. I really had to learn by making mistakes,” he said.

While many good ideas stall, Einarsson found mentors and momentum to begin a small start-up company. “It’s fun to see your idea become an actual tool that can be used so that patients have a safer surgery,” he said.